The Mistake We All Make When Interpreting Other People’s Actions 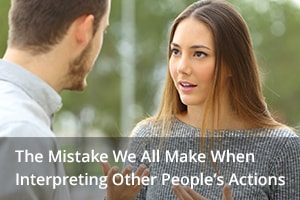 Tell me if this sounds familiar.

You’re excited to see your guy. He walks in the door, gives you a quick peck on the cheek, and…

…hardly notices the fact that you’re absolutely beaming at the sight of him.

Immediately, you’re wondering what gives. Does he not like the new outfit? Geez, you were sure he’d be a fan. Or is he just being a jerk? I mean, how hard is it to give you an enthusiastic greeting?

But what if his lack of excitement has nothing to do with you?

In other words, we tend to assume the way people treat us is a reflection of how they feel about us. But much of the time, that assumption is dead wrong.

In the example above, maybe your guy seems distracted because he’s distracted. After all, there’s a lot of other stuff going on in his life.

That doesn’t mean you’re not important to him. It just means you’re not always the center of his universe.

And even though that makes perfect sense, Fundamental Attribution Error is incredibly common. Practically everyone does it. Not only that, but it’s almost impossible to avoid.

So how do you deal with those moments when Fundamental Attribution Error kicks in?

You can outwit your own knee-jerk assumptions by doing just two things.

ACCEPT WHAT YOU CAN’T CHANGE

Start by accepting that you can’t stop yourself from committing Fundamental Attribution Error. Even the scientists who study this stuff make the fundamental attribution error. We just can’t help it.

There are going to be moments when you want his attention, and you don’t get it. No matter how logical you are, that hurts. And even if you can totally see how his mood might have nothing to do with you, you’ll still feel hurt.

Instead of beating yourself up, accept that it’s a universal thing. Literally everyone does this. It doesn’t mean you’re too sensitive or overly emotional. And it absolutely isn’t “a woman thing.”

So before you do anything else, cut yourself some slack. Give yourself permission to be disappointed when your guy isn’t as tuned into you as you’d like him to be.

CROSS-CHECK YOUR OWN ASSUMPTIONS

Now on to the more practical stuff. You can’t stop Fundamental Attribution Error, but you can counter-act it.

When you have a less-than-perfect interaction with your man, ask yourself if it’s possible something else might be affecting his mood. The simple act of asking that question will lessen the emotional impact on you because the answer is always YES.

I know that’s an anticlimactic solution to a fairly complex problem, but most of the time that will do the trick.

Once you realize he could be upset about a million other things, it’s far easier to stay in a balanced state of mind, yourself. If he remains distant, you can always talk to him about it later.

Fundamental Attribution Error is an unavoidable part of life. There’s really no way to keep from assuming that the way your guy treats you is a direct reflection on how he feels about you.

Never beat yourself up for being emotionally invested. Instead, if your man seems sour, cross-check your assumptions about his mood. Make a quick mental list of all the other things that might be bringing him down.

If you can stay upbeat when he’s not, you have a better chance of influencing his mood for better.  And that’s just one more reason he’s lucky to have a woman like you in his life.