Home > Dating > “I’m Too Damaged” 2 Reasons to Believe Him

“I’m Too Damaged” 2 Reasons to Believe Him 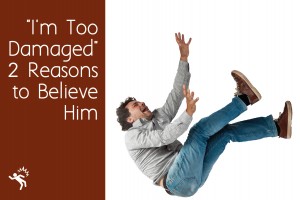 If a guy tells you he’s too damaged, too depressed, or too anything else, take him at his word.

Do you remember that Cold Play song, “Fix You?”

The chorus said, “Lights will guide you home, and ignite your bones, and I will try to fix you.” That was the most popular song from Cold Play’s third album, X&Y. It still gets radio play, and I can understand why.

It sounds sweet. The basic idea is even romantic that you could care about someone so much that your love overcomes the broken condition of their heart.

But in spite of that, this is one of the questions I’m asked most frequently. Women want to know how they can rescue a guy who is neurotic. Someone who claims he’s broken or insists that he’s just not good enough for her.

So, I’m going to tell you what I tell all my clients. When a guy claims he’s messed up, you should be very cautious about moving forward. The same thing goes for a guy who goes on and on about how you’re out of his league. Sure, it’s flattering to hear at first, but it’s a significant red flag if he keeps at it.

Here’s why. When a relationship begins with that kind of dynamic, you’re more or less signing up to be his emotional guardian. Get ready to be his one-woman support network. You’ll spend untold amounts of time and effort working to protect his fragile self-esteem. No matter what you’ve heard about snagging a guy who’s a ‘fixer upper,’ it’s not a fun job.

The feeling that you’re always taking care of him will wear on you. Trust me. Most guys who see themselves as damaged aren’t all that great at returning love and support.

As nice as it might be to think a romantic connection could redeem him, that’s rarely the case. The best relationships happen when two emotionally healthy people come together and form a truly intimate bond. Even if you’re willing to put up with his need for constant emotional reassurance, there’s a better than average chance it won’t pay off.

Insecurity can be a black hole. You simply can’t give enough assurance to another person to make up for their lack of faith in themselves. That’s something that has to come from within. Telling him what he wants to hear won’t make him better. In fact, it’s more likely to encourage him to continue to be needy!

Besides, your relationship shouldn’t be all about fixing another person. Romance should be fun and exciting. It shouldn’t feel like a second job.

If you’re with a guy who claims he’s not good enough for you, don’t argue. Whatever his reasons, accept them and move on. Find someone who is less focused on their own deficiencies and more focused on you.