How to Thrill the Man You Love Without Being a Doormat 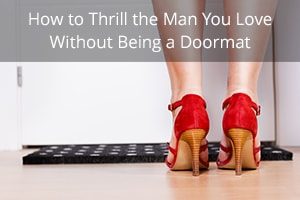 Jamie came into my office in a huff. She pulled off her beanie and plunked down in the chair. Her tawny hair frizzed in all directions.

“Something happen?” I asked.

“No.” She waved my concern aside. “It’s just … well, something a friend of mine said.” She twisted the beanie in her hands.

I knew Jamie well enough to know that nervous gesture meant she was getting up the courage to talk about something painful.

“Okay, let me run this past you.” She frowned. “When I’m in a relationship, I really want to be good to whomever I’m with. I want to take care of him. I want to do nice things for him and make him happy.”

I nodded. Jamie had a kind, loving heart. It was only a matter of time before she met someone just as loving as she was.

Her voice quivered. She took a deep breath.

She glared at me defiantly. “James, I’m not a doormat, am I?”

Now, let me pause my story for a moment here and ask you, what would YOU tell her?

It’s the one piece of dating advice that keeps cropping up again and again:

Don’t be a doormat. Don’t let men walk all over you.

The intention behind this piece of advice is good. It’s a reminder to value yourself.

But a lot of things get thrown into doormat territory that don’t belong there.

Like serving the man you love. Compromise and sacrifice. Loving someone as you would want to be loved.

Doing nice things for the man you love is NOT the same thing as being a doormat.

So let’s tease out the difference and see if there’s a way to be kind and loving without getting taken advantage of.

First of all, what is a doormat?

In a practical sense, it’s the mat you place in front of your door so that people can wipe their feet before going inside.

A doormat, then, is someone who allows other people to walk all over her. She wants people to “come inside” so badly that she doesn’t mind taking on all their yucky stuff.

For the doormat, it doesn’t matter how dirty a man’s shoes are. He can come in anyway, because she’ll clean his shoes for him. The dirtier his shoes, the more useful she feels.

Clearly, that’s not who you want to be!

You want to be the one standing at the door, looking at him eye-to-eye, deciding whether you’ll let him in.

If his shoes are filthy, you’re not going to clean them. You’re going to stand at that door until he cleans his own shoes.

That’s why I sometimes suggest that the opposite of being a doormat is being a hostess. Hostesses are awesome. So let’s talk about what that means.

A hostess wants to make sure that everyone who comes into her house feels welcome, but she’s discerning about who she lets in. She doesn’t invite just anyone. If someone misbehaves, she has every right to ask them to leave.

Jamie wasn’t a doormat because she treated the man she loved like a hostess would treat a much-loved guest.

However, Jamie might want to ask herself if she ever overlooked his “dirty shoes.” Did she let him off the hook for bad behavior, because she was afraid of confronting him?

Doormats can’t shut the door on anyone. It’s not in their nature. They avoid anything that smacks of conflict. They don’t want to get into a fight.

As a result, doormats have poor boundaries. They put up with the dirt, because they’re afraid of what might happen if they tell their partner to wipe his own shoes.

A hostess, on the other hand, has certain expectations of her guests. If she tells them to bring a dish to her potluck, she can reasonably expect them to do it. If they don’t, she notices. She may not invite them next time.

Perhaps the most important distinction between a hostess and a doormat is reciprocity.

When a hostess throws a party, she can expect to be invited to parties in return. She does all the work this time, but she won’t every time. Her guests thank her for her effort and make sure she feels appreciated.

In her previous relationship, she was always the host but never the guest. Her ex didn’t do anything for her in return. He couldn’t even be bothered to bring a hostess gift to the party.

The moral of the story is:

Save your welcome for men who honor you.