Home > Dating > How to Speed Men Up

How to Speed Men Up 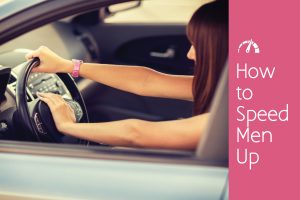 Men are so slow.

eHarmony calls them “snail males,” and for good reason. You could grow Rapunzel hair in the eternity it takes him to make a move.

It doesn’t help that you’re sitting in the passenger seat. Making the first move puts you at risk of putting him off. But there are other ways to speed a man up without kicking him out of the driver’s seat.

When you’re waiting, waiting and waiting some more, weeks can feel like years. So don’t wait for him to make a move. If he’s not calling and asking you out, make your own fun.

Pick up the newspaper and find out if there’s anything interesting going on. Organize a movie night, a barbecue, a picnic in the park. Invite everyone along, even casual acquaintances. Of course, he can come too. If he can get off his glacier.

Making your own fun has several advantages.

(1) It gives you social credibility. It takes effort to make something happen. Sure, sometimes the event won’t happen, or just one or two people will show up, but people will still recognize you and appreciate you for trying.

(2) It keeps you from obsessing over him. You don’t need a man to have a great time. The more fun you’re having without him, the more he’s missing.

(3) You can ask him out without asking him out. There’s nothing forward about inviting a single attractive man along to a group outing. You’re not asking him out. You’re just letting him know about something he might enjoy attending.

The fastest way to speed up a snail male is to give him no greater commitment than he’s giving you.

If he won’t confirm that you’re boyfriend and girlfriend, then don’t treat him like a boyfriend. Don’t reserve your weekends for him. Don’t drop by with special gifts of your free time. Instead, actively date or spend time with other people.

If he wants to have some space in the relationship, then take some space yourself. He doesn’t get your commitment until he’s committed to you. More importantly, he should know that he doesn’t get forever with you if “forever” is not in his vocabulary.

It takes them time to realize what they’re feeling. Time to plan a course of action. Time to mobilize their energy to act.

You can’t speed up a man whose gear is stuck in first. But you can remove red light traffic signals from his path. To do that by giving him risk-free openings to make the next move.

Flirtatious humor is a great technique to smooth the way and make it easy for him to do what you want him to do next.

For example, imagine you’re out socializing when you meet a man you really like. You talk for a while. Things are going great when a natural silence falls. He glances away. You’re sure he’s going to make his excuses and leave. What do you do to indicate you’d like to see him again?

Maybe you sigh. “I’ve been sitting here all evening, and not a single man has asked for my number. It’s enough to make a girl think chivalry is dead.”

He could take the bite and ask you for your number, or he could remark on your comment as if you were just changing topics. Either way, neither of you lose face.

Teasing can involve some risk on your part. Imagine you’re chatting with someone you met online. It’s been a few weeks, and he hasn’t made a move. What do you do to get him to meet you in person?

Maybe you write: “I’m starting to wonder if you’ve got green skin and great scary teeth.” “What! Why?” he replies. You write back: “Because you haven’t asked to meet in person yet. Is there something I should know about? ;-)”

You don’t know if he’ll reply the way you hope he will. But you’ll never know unless you ask.

Although the safest course of action is to do nothing and let him take the lead, waiting on a man to make the next move can be an exercise in frustration.

Take the power back. Don’t put your life on hold for him. Keep busy, stay socially active, and use flirtatious humor to tease out his intentions.