Home > Dating > How to Save Your Relationship from His Children

How to Save Your Relationship from His Children 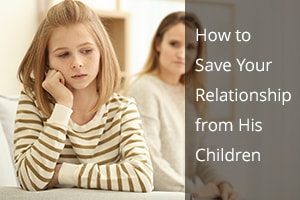 There was only one problem:

His daughter hated her.

Becky told me she could understand—really, she could. From his daughter’s perspective, Becky was stealing away her dad. But that wasn’t Becky’s intention at all.

She respected the fact that her boyfriend was a father first and her partner second. She didn’t want to change anything. She just wanted to be given a chance. After all, she was young, fun and cool. Her sister’s kids liked her. What did she have to do to prove herself?

I hear from women in Becky’s situation a lot. Half of all women can expect to live with or marry a man with children.

Single dads have a lot going for them. Ideally, he made his mistakes in his first marriage, and now has a strong desire to get things right the next time around. He’s less self-centered than the average bachelor. You know up front whether he’ll make a good father by watching him with his kids.

But what you don’t know is how well his family unit will function with you in it.

In relationships where children aren’t involved, a man and a woman come together to create their own life. Both of them have an equal say in determining what that life will look like. They stand united against any forces that could tear them apart.

In relationships where children are involved, an outsider enters an already-established family unit. She’s expected to merge into established traditions seamlessly—or get blamed for wrecking things.

“I feel like a third wheel,” Becky told me. “When his daughter is with us for the weekend, she monopolizes him. If Jared and I happen to get a moment of peace together, she’ll find us and need her dad immediately for something. It’s like she wants him to choose between the two of us.”

She sighed. “Jared won’t talk to me about it, but I can tell it stresses him out. She’s asked him a couple of times not to invite me over when she’s there, but we’re talking about moving in together. She’ll have to get used to me.”

There’s nothing I would have loved more than to tell Becky about a simple and easy trick for getting her boyfriend’s daughter to like her. Unfortunately, it doesn’t work that way. Stepfamilies are tough to get right.

Relationships are hard enough, but when you bring children from a previous relationship into the mix, they get exponentially more difficult.

There is no easy answer. But there are 2 strategies that will help ease the transition to becoming a family.

Perhaps the biggest factor in determining whether your relationship will work is the way your man deals with conflict.

If he makes it clear that he’s on your side, and that the two of you function as a team, and that he’s not going to be put into a position of being forced to choose between you and his children … then you have a much better chance of making it through those perilous first 3 years.

That’s when your risk of the relationship imploding is highest. After 3 years, the risk of divorce drops. And once you’ve been together for 5 years, your marriage has a better chance of succeeding than most.

So be prepared for a challenge, and face it together.

Becky came into the relationship with the noblest of intentions. She didn’t want to replace the girl’s mom, but she did want a relationship. She harbored fantasies of playing the role of “cool older aunt.” She imagined they’d go to the movies together, or have girls nights together, or just enjoy hanging out.

Unfortunately, it takes two to have a relationship, and Jared’s daughter wasn’t interested.

Becky wanted the girl’s approval more than anything, but what if she never got it? Would Jared decide he couldn’t be in a relationship with someone his daughter didn’t like?

It was time for a family talk.

When you enter into a relationship with children involved, everyone’s roles need to be spelled out. Clear boundaries need to be established. Liking each other is optional, but treating one another with respect isn’t.

Sometimes, professional help can make all the difference. Research shows that stepmothers have it much tougher than stepfathers. No matter what they do, stepmothers feel like they can’t win.

So keep the lines of communication open, present a united front, and don’t base the future of your relationship on what his kids think. Stop trying to be everything to everyone, and instead focus on doing what you do best:

Being your usual wonderful self.