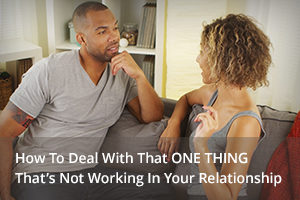 Fill in the blank in the following sentence. Ready?

What did you put in the blank?

It sucks when almost everything about a dating relationship works. It is because it feels like you are just so close to heaven on earth… If it wasn’t for that one annoying issue.

And yet, it’s extremely common. Often, even really solid couples have one or two core complaints about each other.

But as common as this is, most folks don’t know how to get over the hump. And, ironically, when everything else seems to fit, it makes that one thing that doesn’t fit really stick out.

Recently, I came across some good advice for dealing with this kind of thing. In a constant quest to bring you the very best relationship tips, I read a lot – everything from psychological journals to the kinds of magazines you find in supermarkets.

This little tidbit was in an article in Glamour. It was specifically about sex, but the principle can be applied to anything that’s holding you back.

Check out this quote:

“According to sex therapist Vanessa Marin, [getting past that one thing] all comes down to how willing you and your partner are to work on it. If you both are, there’s usually something that can be done. And if one of you isn’t, your relationship probably has bigger problems than sex.”[i]

As long as you and your guy can communicate effectively, no single issue should undo your whole relationship.

So, the real question is when something’s holding your relationship back, how do the two of you work through it?

It’s not too tough as long as you have a good strategy, and the following pointers can help.

First and foremost, establish some ground rules for discussing the problem. Before you really dig into the issue, have a little chat. Agree that you’ll both deal with the difficult topic in ways that are productive.

Some good rules might include things like focusing on building a future.  That helps you stay focused on solutions rather than blaming (more on that in a bit).  Next might be avoiding sarcasm and refusing the temptation to bring up more than one irritation at a time.  Fix just one thing… not the entire relationship history.

And if things get tense, TAKE A BREAK.

It’s easy to get caught up in blaming each other, but that doesn’t help anything. Even if the issue is clearly his fault, avoid blaming language. Don’t say things like, “Well, this is all because of you.”

You can discuss responsibility, of course. If there’s something he needs to change, you should be able to tell him. But even then, stay focused on the solution.

Finally, don’t expect to overcome the problem after one conversation.

Most relationship issues take time to resolve. After all, you can only take one step at a time. If the solution is three steps away, there’s no way to take one flying leap and be done. You have to take each individual step.

But that’s okay. The goal is an improvement, not immediate perfection!

If you’re happy with everything about your relationship except one thing, that’s okay – as long as you and your guy can talk about it.

Come up with some solid rules for problem-solving, keep your focus set on improving your future interactions, and remember that it takes time to grow as a couple.