Home > Dating > How to Deal with His (Insane) Expectations

How to Deal with His (Insane) Expectations 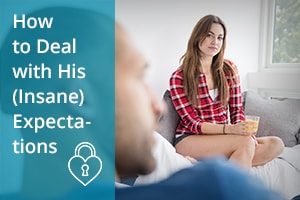 Think about the last time you experienced really bad service at a restaurant.

Maybe it took forever to get a table. Or the food was cold when it arrived. Or your order was wrong.

Whatever the case, THE THING that made the experience negative was an unmet expectation.

Expectations are powerful. And the feeling of disappointment that comes with unmet expectations HURTS.

The implications for your relationships are huge.

Trust can’t survive in an environment of constant disappointment. Neither can intimacy. If either of you feels let down all the time, that’s not a good sign.

Good-bye happily ever after. Hello broken heart. You don’t want that.

But what about his crazy, unrealistic expectations? He’s a guy, after all. Some guys go into romance with pretty off-the-wall ideas about the way dating should play out.

Let’s take a quick look at three common male assumptions about women, and what you can do to deal with his (possibly insane) expectations.

You don’t want to bug him, but you don’t want him to think you’re not interested, either. Especially when you first start dating a guy.

The easiest way to strike the right balance is to maintain contact by putting the ball in his court. Let me show you what I mean.

Send him a text. Tell him you had fun talking or hanging out the other night. Then simply invite him to let you know when he wants to hang out again.

Now he knows you’re interested, but he doesn’t feel pressured.

BONUS: A lot of guys like to feel like they’re taking the lead. This is a way for you to do something proactive while still giving him that feeling.

Plenty of guys say they want a gal who can hang with them in any environment and talk to them about any topic. But even when they end up with a girl who’s down to talk about anything, they don’t share.

And pushing won’t get him to open up.

Try this instead. When you can tell there’s something on his mind, good or bad, ask what’s up. Once. If he talks, listen. If he doesn’t, don’t make a big deal of it. Just move on.

Over time, he’ll learn that you’re always willing to be a sounding board, without being pushy.

BONUS: That’s exactly the kind of scenario that will lead him to share with you more often.

It sounds like an outright contradiction. He wants to know you can take care of yourself, but he also wants to be your knight in shining armor.

Here’s what you SHOULDN’T do. DON’T play the role of the weak, needy female. That’s not who you are.

Instead, just be authentic in each moment.

We all have moments of strength and weakness. If you’re bold enough to show it when you need a hand, he’ll have plenty of opportunities to feel like the hero.

BONUS: He’ll be far more likely to let you know when he’s hurting, too.

Unmet expectations can choke the life right out of your romance. But that doesn’t mean you have to jump through a bunch of ridiculous hoops.

Some of the things guys expect are kind of nuts. Instead of letting that get you down, use these proactive relationship hacks to stop disappointment dead in its tracks.