Home > Commitment > How to Avoid the Easiest Relationship Mistake

How to Avoid the Easiest Relationship Mistake 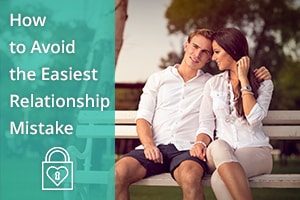 Some breakups are worse than others.

When romance goes south over something big, at least it makes sense. But when things tank without obvious explanation, the lack of resolution is particularly upsetting.

There’s one really common relationship mistake that almost everyone has made at some point. According to Divorce Magazine (I swear I’m not making that up), this common mistake is one of the leading causes of divorce.[1] And yet, it’s so subtle, you might not even think of it as a mistake.

Would you like to know what it is and how to avoid it?

Imagine this scenario. Your guy meets you for dinner with a spring in his step. He’s in a good mood. You ask what’s up and he tells you about something good that happened in his day.

He’s clearly excited about it, but the good news doesn’t really interest you. Maybe his favorite team won, but you don’t like sports. Or he had a really good workout, but you don’t see why that something to get pumped up about.

How do you respond? The answer to that question has predictive powers.

Practically everyone knows it’s important to support your partner when things are rough. If he gets laid off, you know he’s going to need some encouragement. The common mistake most of us make happens at the opposite end of the spectrum.

It’s important to support your partner when things are good.

That can be hard to remember because people in good moods don’t seem to need support. We think of support as something we give when people are down. But if he can’t share his joy with you, that’s a huge hit to your intimacy.

If you don’t want to fall prey to this problem, there’s an easy solution.

The following solution sounds simple. And it is. In fact, it’s a foundational concept for building intimacy.

It has three parts:

Now let me break it down for you so you can use this in your own life.

First things first. Get really good at recognizing his accomplishments.

The big stuff is easy. If he gets a promotion or hits a major fitness goal, like running a marathon, you know to make a fuss. But what about the small stuff?

His favorite team wins a playoff game. A movie he’s been looking forward to comes out. He finally crushes the level he’s been stuck on in his favorite video game.

That stuff may seem silly, but all of life’s joys matter. If he’s happy enough to tell you about it, then it counts as a success.

When he shares good news, let him know you heard!

Nodding or mumbling “mmhmm” isn’t enough. Make sure you actually say something about it. “Oh, the Cowboys won? Sweet! I know you were nervous about that game.”

When you overtly acknowledge the things he’s happy about, he’ll feel validated. It communicates that you’re invested in the relationship and in him.

You don’t have to pretend you’re into the same stuff he’s into. All you have to do is show him you’re happy that he’s happy.

Celebration is underrated. Especially in romance.

We roll our eyes at couples that make a big deal about a 6-month dating anniversary. Really, that’s a shame. Celebration is fun . . . and meaningful.

You don’t have to break out the party hats every time he has a slightly better golf game. But a kiss to go along with your congratulatory remarks isn’t a bad idea.

If the success is a little bigger, like landing an important account at work, suggest going out to dinner or get him a card. Small gestures of celebration go a long way.

Making a habit out of recognizing, acknowledging and celebrating his successes gives you two HUGE benefits. It strengthens the relationship’s emotional intimacy, and it encourages him to pay more attention to your successes.

Don’t let your romance take a step backward when things are good. Make a big deal out of every little success.

The more you live it up during the good times, the more good times you’ll share with your man.