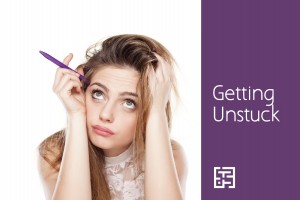 But he’s not making any adjustments to his schedule. No matter how many times you talk to him about it, the situation doesn’t change.

The problem appears to have no solution. You’re stuck.

Being stuck is no fun. Whatever the issue, big or small, here are two ways to get unstuck.

This is a classic problem-solving technique. It works well with problems that feel big and unwieldy. The kind of problems that leave you feeling overwhelmed just thinking about them.

Take the problem and break it down into a series of smaller problems.

Take the example above. He’s not spending as much time with you as you’d like. One of the smaller problems might be that he doesn’t even use a schedule, so whatever is most urgent gets the lion’s share of his time and attention. Dive into that problem. Is he open to using a planner to schedule social time in advance?

Or maybe a smaller problem is that he believes the two of you don’t have any recreational preferences in common. Working on that subcomponent of the larger problem might get you “unstuck.”

Solve that problem and it could take care of the bigger issue. If the problem persists, look for the next small problem and tackle it. The more you master the smaller pieces of the big problem, the more the situation will yield to your efforts to create positive change.

Here’s another trick for becoming “unstuck” with a seemingly insurmountable problem.

Write down the reason a solution won’t work. “The reason talking with him about the issue won’t work is because ________ (fill in the blank).”

Try this with several different solutions that you know won’t work. Often, this mental exercise helps you to see beyond the sticking point. It guides your mind to think on a deeper level about why a solution won’t work.

Thinking about why a solution won’t work sometimes allows your mind to perceive layers of the problem that you had been ignoring or had not considered before. Insight into these root level considerations can reveal avenues to move forward.

Lists allow us to take something complex and see it differently. Sometimes the added insight sheds light on an unexpected solution.

Write down each solution you know won’t fix the current problem. Then, beside each failed solution, write down why it won’t work.

Often this mental exercise will help you see beyond the sticking point. It guides you to think on a deeper level. Knowing why previous attempts failed can lead to an epiphany. 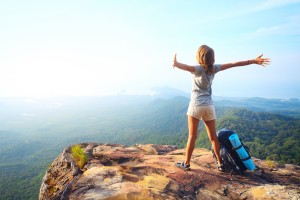 When you’re stuck, don’t give up. While feeling stuck is frustrating, there’s almost always a solution. The trick is finding it.

These two techniques will help you look at the issue with fresh eyes, and sometimes that’s all it takes.