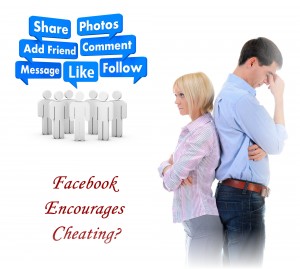 It wasn’t that long ago that a study published in Cyberpsychology, Behavior, and Social Networking announced Facebook increases the risk of cheating. According to the article, the temptation lies in reconnecting with an ex, which is ridiculously easy to do on Facebook.

Now we’re being told that online Twitter spats often spill over to the real world, leaving romantic partners at each others’ throats offline. This, courtesy of a study done by the University of Missouri.

Now, before you decide the folks at U of M are getting a little tech-paranoid, think about the logic behind these findings. Facebook and Twitter are all about connecting people, right? You’ve undoubtedly caught up with someone you haven’t seen in years via one of these social networks. They keep us all plugged in.

But, there’s a downside, too. People tend to be meaner online.

I’m hardly the first person to make this observation. The prevailing opinion is that the distance we feel sitting safely behind our keyboards allows us to be more candid and less tactful than we would be face-to-face.

If you tear into someone online and then see them a few hours later, things are going to be…awkward. Given the strong possibility that you came across more aggressively online than you would have in person, it’s easy to see how this dynamic can lead to some problems.

Oh, and don’t forget about the whole wandering eye issue. You hit a rough patch with your current partner. Later that day, you discover a new picture of an ex on your timeline. Geez, he/she looks a little more attractive than you remembered. Suddenly, you’re all googly-eyed for the person you used to be with. And, hey! Look at that! The “message” button is right there!

Now, you’re acting like a college kid wearing beer googles. You’ve totally forgotten about why you broke up with the soul-destroyer. And, you may be a little hazy about the fact that you’re with someone else now.

Here’s the moral of the story. Try to keep romantic conflict in the real world. Don’t turn to social networking when you’re in the middle of a fight at all. Keep that stuff offline.