Home > Commitment > Draw Him Closer by Feeding Him This

Draw Him Closer by Feeding Him This 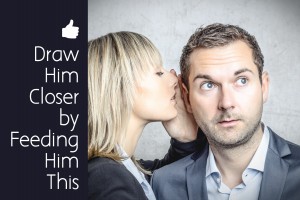 The male ego is a strange beast.

On one hand, men are proud creatures. They like to feel independent, strong and respected. But they can also be big babies.

Dealing with your guy’s ego is kind of like feeding a lion. If you don’t give it enough food, it’ll wither. It’s hard to imagine anything more depressing than the king of the jungle wasting away simply because he can’t get a decent meal.

But if you feed his ego too much, it can turn into a rabid, blood-thirsty monster. Something like Jaws with a mane.

Too much and too little are both bad.

Granted, this is true for everyone. But it’s especially true for us guys. And that’s because guys tend to use their ego as a shield.

Few men will let you get close to them if their egos have recently taken a beating.

Author Carli Blau puts it this way: “A man will sooner let his ego control his emotions than allow his heart to control it, especially if his ego has been bruised.”[i]

So if you want a real connection with him, you have to learn how to feed a lion. Once you learn to do this you’ll be nothing short then His Secret Obsession. Hence the title of my newest course.

Making sure his ego gets enough “food” is fairly easy. Listen to him. Make sure he knows you’re invested in the things that matter to him. And always give him the impression that you admire him (even if you disagree with him sometimes).

Although, I have to admit, I may be using the wrong analogy. “Feeding his ego” is not the best way to explain what you really need to do.

What you’re really doing is protecting his ego, not feeding it. Because you only get to see the heroic version of your man when he’s feeling heroic.

When you draw out a man’s hero instinct, you see the best in him. When his ego is bruised, you’re likely to see the worst side of his masculine nature.

So you should never point out how other men have superior talents (even if they do). And never tell him he’s acting like a toddler, even if he is.

Instead, always give him the impression that you admire him for his unique talents and personality traits.

And then SAY IT. Say it out loud. Guys need that.

Of course, if all he hears from you is how awesome he is, you might fear he’ll have difficulty getting through doors with his big head. But don’t worry about that. It doesn’t happen in real life. Here’s what really happens when you protect a man’s ego.

He stops feeling the need to protect his own ego. He becomes gentler. Kinder. More considerate. And more interested in the well-being of others.

There will be times when you need to ask him to change something. After all, he’s going to screw up some times.

When he does, focus on what he did, not who he is.

If you go after his character, you’ll bruise that ego. His defenses will fly up, and your connection will suffer. 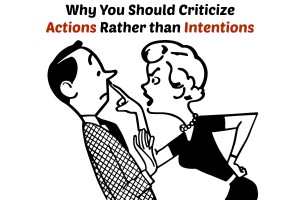 For example, if he ditches you to hang out with his friends, tell him how that made you feel instead of telling him he’s a jerk. It’s always easier to ask someone to change certain actions than to get them to admit they are a bad person in need of reform.

You want a guy who’s confident without being arrogant. Bring out the best in him by protecting his ego so he doesn’t have to. He’ll appreciate you for that. More than you might imagine.