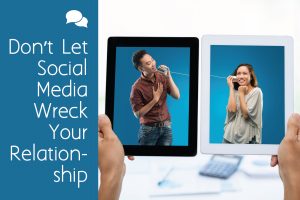 They post sweet little comments on each other’s pages. They’re snuggled tight in their profile pics. Each time they go off to the beach or the mountains, a photo slideshow pops up the next day.

It’s enough to drive anyone jealous.

The worst thing is, researchers confirm that couples who look good on Facebook are probably happy in real life, too.[1]

Researchers can even predict the strength of a relationship from examining Facebook profiles. They look for clues like couple photos, affectionate comments, and a coupled-up relationship status.

But there’s one little problem…

Facebook can expose the cracks in a relationship, too.

Couples counselors and divorce lawyers are well acquainted with the havoc Facebook makes of relationships.

It often starts when an ex or a former flame makes a friend request. You don’t think anything of it. After all, it was so long ago, and you’re keen to find out what they’re doing now. But your significant other notices. Jealousy creeps in. Arguments ensue.

Before social media arrived on the scene, it wasn’t always easy to avoid an ex, but it certainly wasn’t impossible. Once you got into a new relationship, you knew to delete your ex’s contact details and throw out all old memorabilia—or at least hide it in a box in the back of the closet. You didn’t shove your past in your new boyfriend’s face.

But if happy couples post photos of each other on Facebook, what happens when they decide to go their separate ways?

The photographic evidence remains … unto eternity.

Once relationships have gone public on social media, they’re incredibly difficult to erase.

You could delete all your pictures of each other and ask him to do the same, but what if a friend took pictures of the two of you and tagged both your names? What about all those lovey-dovey posts dating back years?

Luckily, Facebook now offers the ability to untag yourself.  But exes emerging from a long-term relationship still face a mountain of work to clear themselves from association with one another.

Couples who go public on social media reap the rewards of greater relationship satisfaction. But if they ever split, they face being reminded of the past at every turn, which could dampen the fun of any new relationship.

It’s up to you to close the doors on the past. Don’t give past relationships a second life by leaving their ghosts online.

When a relationship ends, remove any reminders from social media. Delete old couple photos and untag yourself from couple photos on other people’s accounts. (If you don’t want to delete old photos or posts, you can change the privacy permissions to “Only Me” so that only you see them.)

If you’re like most people, your Facebook friends include acquaintances, colleagues, and people you’ve fallen out of touch with, as well as close friends and family. Don’t include everyone on every post. Save personal comments for those closest to you.

To do this, separate your friends into lists. You might have a list for work colleagues, a list for family members, and a list for your closest friends. By using lists, you can technically remain friends with an ex but exclude them from posts about your private life. You can also add an ex to your Restricted list, which will prevent them from seeing anything but public posts.

Remember that anything you publicly post about your partner shows up in all your friends’ feeds. Spare your friends the embarrassment. Avoid oversharing. Take advantage of private messaging instead. (Your friends will like you better as a result, claim some studies.[2])

Similarly, keep any couple photos you post online G-rated. Save the smooching and sexy stuff for your private album. You’ll be thankful later.

But we’re all just human. With social media in everyone’s faces, we have to be particularly careful about how our online behavior affects those we love.