Home > Dating > Do Men Fear Commitment, Or Is It Something Else?

Do Men Fear Commitment, Or Is It Something Else? 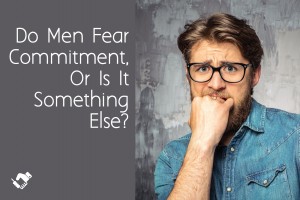 The idea that men are afraid of commitment is universally accepted. Most of us think of it as a given, assuming men and commitment just don’t mix.

But this common perception is fundamentally flawed. Men aren’t really afraid of commitment, and never have been.

I know. That flies in the face of every romantic comedy you’ve ever seen. At least half of them feature at least one male character who talks about committed relationships like they’re prison sentences.

Settling down with one woman means sacrificing freedom, excitement, and independence. We’re so accustomed to this theme; it would throw us off if it was left out.

But it’s all wrong. While there is something men are afraid of, it isn’t that.

Of course, most women are under the impression that men are very much afraid of commitment. As a result, when a man resists committing to serious relationship there’s potential for all kinds of confusion. And it’s worse when you are looking for a committed relationship.

You’ve probably experienced this. You start dating a guy who really clicks with you, but things stall out shy of commitment. He tells you he’s not in a place where he’s looking for that right now.

The temptation is to burn bridges with him. After all, if he’s not mature enough to handle a grown up relationship, what’s the point?

However, if you really feel a connection with him, my advice is to avoid writing him off. Here’s why.

Men don’t really have issues with commitment in general. The real fear men harbor is committing before he feels ready to fulfill his side of the commitment.

And really, that makes sense. Or, at least it does to men.

That’s because men have a strong aversion to failing. He doesn’t want to commit to something unless he feels he can “win” and gain your approval.

Many men avoid taking on the role of “boyfriend,” “husband,” “father,” and other roles until they feel certain they can “succeed” in those roles.

For example, he may have a goal of becoming financially independent before he commits to a new role in your life. He may think the new role comes with the expectation that he will provide for you.

He will feel that way even if it doesn’t make sense. It’s wired into a man’s psyche.

As a woman, you may be thinking, “What’s the big deal? He spends time with me every day already. Why can’t he just make a commitment?”

And again, the answer is that men and women have different instincts when it comes to commitment. For you, it’s the beginning of something new you will grow together over time. For him, it may seem like a promise he’s not sure he can keep…yet.

And that last word (“yet”) is the key. Don’t burn bridges with a great guy when he says he’s not ready yet.

He may tell you it will be many years before he’s ready to settle down with someone. He could be right. Or, he might feel very differently in six months.

So keep communication lines open. Stay on his good side. You never know what might happen next.

P.S. have you ever had a sudden breakthrough with a man? If so, I would love to hear your story. Please click here if you would be willing to share the story of your success.