Home > Commitment > Discover What Jealousy Can Teach You

Discover What Jealousy Can Teach You 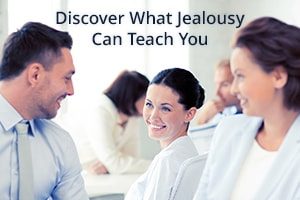 The world has blown up. There are only two people left on Earth:

There’s no one else left. No rivals. No one thinner, prettier, or sexier. No one who’ll steal him from you.

Do you fall in love and live happily ever after?

It’s tempting to think that’s what it would take.

To get the attention of a Mr. Dreamy, you’d have to rid the world of other women. Other women are the problem. They’re the reason men look the other way.

If only she wasn’t here, he’d pay attention to me.
She stole him from me, even though she knew I was interested in him.
I can’t compete with her. I’m no swimsuit model.

Jealousy makes a lot of sense when you operate from a “scarcity” mindset.

You’ll find a lot of support for that belief. It’s a popular one.

But if you stretch that belief to its logical conclusion—that the best way to snag a man is to get rid of the competition—you realize there’s a problem with scarcity thinking.

If the world blew up tomorrow, leaving only you and your ideal man, would you be happy?

Maybe you would. Maybe love is all you need. Maybe you don’t need other people.

But maybe Mr. Dreamy isn’t all he’s cracked up to be. You’d be left until the end of time with no one but a man for company. Might get boring. You might end up wishing for another woman to talk to.

To be happy, we need more than love. We need our social network around us.

Without friends, who would we vent about our other half to? You can love someone to the moon and back, but still need your friends for heart-to-hearts.

As long as there are other women in the world, there’s a chance your dream man might shift his attention away from you. And that’s a chance worth taking.

Instead of eliminating the competition, a better strategy is to look at what you do when you start feeling jealous.

When most people feel jealous, they immediately go into blame mode.

How dare he stare at her like that in front of my nose?
If he really loved me, he wouldn’t talk to her.
She knows he’s taken. I’m going to march up there right now and put an end to this.

Now don’t get me wrong…guys do some really dumb things in relationships. And it’s often totally his fault for making you feel jealous. I often tell men they need to take personal responsibility for the emotional impact of their actions.

Jealousy can be a wake-up call. Those feelings of insecurity often come from inside, not outside.

When a situation triggers us, it’s a red flag pointing to underlying emotional issues that may need attention.

Maybe betrayal from a past relationship is coloring what you’re seeing now. Maybe you’re not as self-confident as you’d like to be. Maybe you’re craving some drama or attention. Maybe you’re already angry at him for something else and looking for an excuse to be mad.

When you get that gut reaction of jealousy, stop and check in with yourself. What’s really going on here? Is it just that he’s being a jerk? Or could there be something more?

It’s hard when Mr. Dreamy turns the full wattage of his smile away from you and onto someone else. But that doesn’t mean he’s flirting with the other woman or comparing her to you.

We can all admire a gorgeous specimen of the opposite sex without loving our own partner any less. Most of us know by now that good looks aren’t everything, certainly not enough to break the bond of genuine love for.

So, you could torture yourself with the latest statistics on the rampant infidelity in American society today and police his every step…

Or you could focus on what it would take to feel secure and strong within your relationship.

Feeling secure and strong in your relationship is an inside job. Asking him to avoid looking at or speaking to attractive women isn’t going to do it.

What would it take to know you’re worthy, beautiful, and eminently lovable? To know that, in his eyes, you’re the only woman on Earth?

Could you find that strength and inner peace?