Build Trust with Your Partner 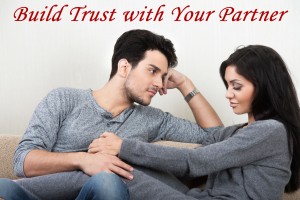 Arthur Ashe is credited with saying, “Trust has to be earned, and should come only after the passage of time.” That’s the conventional wisdom. We think of trust as something people earn from us.

But is that the best way to build trust?

Surface level trust is common. It happens all the time. But finding someone you can trust with your life is a much taller order. That kind of trust requires a more proactive approach.

In other words, sitting back and waiting for the guy you’re dating to earn your trust isn’t likely to create a deep sense of loyalty. If you want that kind of trust, you’ll have to build it on purpose as a couple. And how do you do that? By doing something that’s both simple and terrifying.

I know that sounds weird. It flies in the face of how we think trust is built. You don’t just give it to people. They’re supposed to earn it. But let’s think this through. Suppose you trust me with a small amount of money, and I handle it responsibly. If I need a bigger loan later on, you’ll be more likely to agree.

The practice of giving trust builds trust. But that’s just the beginning.

To create a really deep sense of trust, you and your partner will need to know what issues are the most important to you. You’ll have to openly share some pretty personal information. This is, itself, an act of trust. And once you both know the other’s core fears about trust violation, you’ll be able to practice giving each other trust in those specific areas.

Let’s say you’re a very private person. You don’t like having pictures of yourself show up unexpectedly on his Facebook wall. You’re also not comfortable with the idea of him sharing personal information about you and your feelings with his buddies. Privacy might be an area where people have violated your trust (perhaps without realizing it) in the past.

Your first step would be to talk to him about the things that cause you to lose trust. Explain your feelings. Let him know why these things make you uncomfortable. Don’t sugar coat it or act like it’s no big deal. Tell him in no uncertain terms that this is the kind of stuff that could undermine your trust in him.

Then, give him trust before he’s even had the chance to earn it. Give him permission to post pictures of you on Facebook. Tell him he can talk to his friends about you.

That’s right. Give him permission to do the things that scare you. Having heard why those things make you uncomfortable, he should have enough information to move forward with your insecurities in mind. Let him know that this is an opportunity to demonstrate that he’s heard and understood what you need to feel like you can trust him.

Make sure you’re very clear about this. He needs to know that how he handles this stuff will either build trust or tear it down.

Also, make sure you’re on the same page when it comes to expectations about each other’s behavior. For example, he may think it’s perfectly okay to continue relationships with his platonic female friends, including meeting for coffee one-on-one. If you’re not comfortable with that, you’ll need to let him know.

This is kind of like the opposite of discussing your core fears. It’s important that you both understand what the other feels is normal and permissible within a relationship. If you don’t have this conversation upfront, one of you may do something that damages trust without realizing it.

Trust isn’t that difficult to build. It takes courage, sure, but it’s not rocket science. Rebuilding trust, however, is hard. It’s best to build trust with crystal clear communication so you minimize the number of times you have to repair or rebuild it.

The key thing to remember is the active role you both play. Trust isn’t a wild flower that grows and thrives without attention. If you want a relationship of deep, soul-level trust, you’ll have to work to build it.

Start by giving it away before it’s earned.