Be Friends with Your Man (Just Not All The Time) 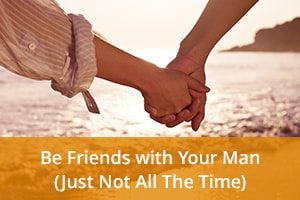 Do you consider your partner a friend? You should.

The French philosopher Jean de la Bruyere once said, “Love and friendship exclude each other.”

This is a deep topic. I mean, think about what the average dating relationship is like.

There are similarities to friendship, for sure. You share mutually enjoyable activities, hang out, talk, support each other, and generally stay in close communication. That doesn’t sound all that different from your connection with your best friend.

And then there’s the stuff you DON’T do with your best friend. Like kiss.

In one sense, an underlying friendship makes romance stronger. But, to our French friend’s point, there’s a reason we use terms like “the friend zone” to describe guys you’re not into. Friendship is NOT romantic love.

Researchers have even studied the tension between the two concepts. Here’s what they found.

When you’re not friendly toward your guy, he’ll want you more. Basically, he’ll be more inclined to chase what he doesn’t have. But without the underlying likeability of friendship, he’ll be less satisfied with what he gets when he catches you.[1]

What a catch-22. Be his buddy, but kill the passion. Or keep the passion alive, but crush your actual connection.

Striking that balance is tricky, but doable. You have to intentionally cultivate both the friendship and the romance. That means doing two things…

Maintaining a friendship with your guy sounds easy enough, but it can be surprisingly hard. Intimacy changes the relationship, even before things get physical.

The single most important thing for protecting the bond of friendship is meaningful shared experiences. Let’s unpack that.

I’ve written before about having fun with your man. That’s important. Nothing replaces a sense of playfulness. But having a good time isn’t enough. There needs to be meaning, too.

For example, watching a TV show you both like is fine, but not particularly meaningful. You’re not even talking. Instead, do stuff that forces interaction. That can be something like a tour of a local winery, or volunteering at the same soup kitchen.

The key is having the kind of experiences that create a foundation of friendship.

It’s easy to avoid that kind of stuff when you’re dating. Don’t avoid it. Go after it.

Stoke the fires of passion.

But if you only do the friendship stuff, before long you become besties who used to be in love. That’s no good. It’s important to incorporate some romantic excitement, too.

The best way to that is to do things that friends don’t do for each other.

For example, surprise him from time to time with an unexpected passionate evening. Get dressed up for date nights. (Seriously. Go as all out as you would for a first date.) Send him a racy text message. Get him a little gift. Do something, anything, new, different, and totally unexpected.

Oh, and tell him how you feel about him as your boyfriend.

It’s entirely possible to have all the stability of friendship mixed with the vavoom of romance. But it’s not going to just happen. You’ll have to make it a point to work both sides of the equation.

Keep the friendship strong with meaningful shared experiences, and keep the passion going with spontaneity and affectionate communication.

If you strike that balance, you’ll have the kind of storybook romance you’ve always wanted.