Home > Commitment > More Than Friends? When to Worry about Another Woman

More Than Friends? When to Worry about Another Woman

Alexis hoped she was overreacting. 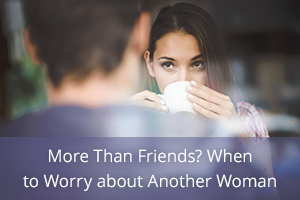 “He says they’re just friends, and I want to believe him,” she told me. “The problem is, I know women like her. They get close just because they can.”

Alexis’ boyfriend Eric was a good guy. He was friendly, easy-going, and sociable. He was the sort of person who lent a hand to anyone in need. He liked being the knight in shining armor.

All of which made him an easy target for an unscrupulous “friend.”

“I don’t think she actually wants to break us up,” said Alexis. “She just likes controlling him.”

The woman in question was one of Eric’s work colleagues. She had been asking Eric to stay late to help her. She asked for him to be assigned to her team. Several times she’d suggested that the two of them go to lunch to talk over a work issue.

Eric, always amenable, agreed. He didn’t see the problem. He was committed to his job, and he had no feelings towards her.

None of that made Alexis feel any better.

“Am I being irrational, James? Am I just paranoid and jealous?” she wanted to know.

I didn’t think so.

I thought Alexis had very good reasons to be concerned.

The way she and Eric handled this situation would set the tone for their relationship to come.

Jealousy is a Fact of Life

Jealousy has got a bad rap.

But jealousy is a natural human emotion. According to therapist Esther Perel, it can even spice up a relationship. When we feel jealous, we realize how much of a catch our partner is. It can re-invigorate our desire.

Problems arise when couples deny, shame, or minimize the complicated emotions around jealousy. They argue about it, or refuse to talk about it.

It’s good to assume that your guy is going to get jealous sometimes, and so are you. That feeling may be yucky, but it doesn’t have to tear you apart. It can be the starting point for an investigation of what makes you feel vulnerable and what makes you feel safe.

Jealousy is an invitation to talk about boundaries.

Boundaries are rules you put in place to make sure you both have what you need to feel safe in the relationship.

Some people think you shouldn’t need boundaries if you love one another. You should trust each other to do the right thing.

But I look at boundaries in a different way. Boundaries are like walls you build around your love to keep it safe.

Your love is a fragile thing. It’s tender and private. When you set boundaries, you build a house around it to keep it protected from the outside world.

Boundaries That Should Never Be Crossed

Infidelity expert Shirley Glass offers a checklist to determine whether a casual relationship is evolving into an emotional affair.

Luckily for Alexis, none of those things were true. She knew she could trust Eric.

But she also knew that this other woman’s behavior wasn’t right. How could she help Eric see that he needed to be careful?

I encouraged Alexis to talk to Eric about this idea of building a house around their love.

They needed to put up “walls” to keep their love safe from everything outside.

You can probably think of some more.

By framing these boundaries as something that protects their relationship, Alexis found it easier to talk to Eric about her fears.

It’s not about whether she trusted him. It’s not even about this other woman.

It’s about keeping their love safe from harm.

That’s something her knight in shining armor was more than happy to do.