Home > Commitment > 3 Ways to Be a Woman Unlike Any Other

3 Ways to Be a Woman Unlike Any Other 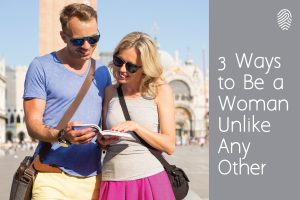 It’s a mystery why men pick one woman to marry over all the others.

Some men go through one amazing girlfriend after another. It never works out. Then one day he meets someone, and that’s it. He’s ready to pop the question.

What makes her different from all the other women he’s been with?

From outside the relationship, it’s hard to see. If you compare this woman to his previous girlfriends, you might not see much of a difference. In fact, his fiancé may seem to have less going for her. Outsiders might think he picked the wrong girl.

Here’s a little-known insight about dating:

That distinction is crucial.

We don’t pick a person. We pick the relationship we have with that person.

Love is not like judging a beauty pageant. A man doesn’t sit there and watch women parade by, assessing their qualities on a scorecard and asking out the winner.

Love is an experience. It unfolds as two people come together and interact with one another over time.

Think of it like a chemical reaction. You could pick your best two chemicals and mix them together, hoping for a favorable reaction. But you’d have better luck testing various combinations until you found your desired reaction.

That’s why we date.

In the end, we come to understand that the objective qualities of a person matter less than how we feel when we’re together.

So how can you make a man feel hooked from the moment you meet?

There are two things all of us look for in a new relationship:

Most of us do quite well with the first. We find out quickly how much we have in common. Liking the same TV shows, music or books gives us something to talk about.

But the second is more difficult.

If you’re too similar to another person, there’s not enough novelty to keep things interesting. You want someone who’s different enough to you that a relationship will be exciting.

So don’t be afraid of being different to your date. Your differences won’t drive him away; they might just intrigue him.

Share your interests and passions, even if they’re totally off his radar. Offer to introduce him to places he’s never been or activities he’s never tried. Give your time together a dose of novelty, and he’ll find it hard to forget you.

Back in a different era, men had to prove themselves while courting a lady. They were expected to open the door for her and offer her a hand. A man who didn’t make these gestures wasn’t a gentleman.

Times have moved on, and that’s a good thing. But men still carry a deep need to prove themselves to women. A woman’s high standards help a man rise to the occasion. He sees that she’s not going to be content being treated like every other woman he’s met.

Only you can decide what standards feel right to you. But, once you’ve decided, don’t relax them simply because you really like someone. Expect a certain standard of behavior from him, and he’ll treat you the way you deserve.

Life is fast these days. We’re busy talking, eating, gesturing, and engrossed in an activity. We don’t often have time during a date to check in with how we feel.

But it’s in those quiet times when no one is speaking that we can really sense how we feel in another person’s company.

It takes a lot of courage to be present during a natural pause in the conversation. It’s tempting to fill that gap with words or activity.

Silence can be scary because it reveals the truth about how we feel.

Be courageous. Don’t break the silence. Give him space to check in with himself. Check in with your own feelings, too. How does it feel to be with him? Is it comfortable? Awkward?

After all, the way you feel with him matters just as much as how he feels with you. You’re looking for a relationship that feels good to you, not a man who looks good on paper.