3 Strategies to Tame a Guy Who ALWAYS Has to Win 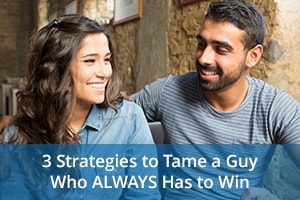 “He has to win at everything!”

“We can’t even go for a game of mini golf without his ‘gotta-win’ hat going on. It’s not even fun anymore. We go for a hike, he’s gotta pass everyone else on the trail. I keep telling him it’s not a race to the finish line. Stop and smell the roses, you know?”

I knew. “Have you tried talking to him about it?”

“Every time.” She rolled her eyes. “He claims he gets it, and tries to explain the idea better than I did. Then he’s back to his old ways.”

This is what I knew about Damona’s partner. He worked in finance. He’d been a star athlete in college. Status mattered to him. He worked hard so he could play hard.

Status mattered to Damona, too. She liked being with a man who was successful and treated her like a queen.

But that very thing she fell for in him—his ambition and drive—was making their relationship intolerable.

He never relaxed, she said. He turned everything into a competition. How many minutes would it take him to vacuum the house? Could he do the dishes faster than she could load them in the dishwasher?

She wouldn’t have minded so much—after all, it was great he shouldered his share of the chores—except that he rubbed her nose in it every time he “beat” her.

He won; she lost. He was the man. She did it like a girl.

It made Damona’s blood boil. “I tell him, ‘We’re not in kindergarten! Grow up already!’”

If you’ve ever dated a competitive guy, you know how hard it can be.

Why does he DO that?

Why does he turn everything into a competition? Why does he brag about winning?

How can you get him to see that “winning” in love looks a lot different from winning on the sports field?

After all, YOU know that it’s better to be happy than to be right. It’s better to lose an argument than lose your partner’s respect.

Unfortunately, those concepts don’t always fly in the boardroom.

A man who doesn’t prioritize winning can find himself falling behind his more competitive colleagues.

Competitiveness is important to men. It defines their relationships from a very young age. Any time a group of boys gets together, their playfulness quickly turns competitive.

Trying to beat each other serves a purpose. It establishes their place in the pecking order. The boys who end up on top become “alphas.” The boys who lose are relegated to “beta” status.

So the very thing Damona loved about her guy—his high status—was a direct result of his competitiveness.

Is it possible to break past this kind of barrier in a relationship?

I believe it is, and I’d like to share 3 strategies to help with that today. These strategies can help you survive life with an overly competitive man.

I reminded Damona that there are two sides to this coin. “It’s hard when he brings that ‘win-at-all-costs’ attitude home, but his drive and confidence were among the qualities that attracted you in the first place, right? He’s an alpha male. He didn’t get there by relaxing in his mother’s basement. He got there because he was ready and eager to fight for his place in the world.”

“And you benefit from his competitiveness. You feel proud to be with him. He’s successful, he’s doing well in his career, he’s respected. That makes him pretty appealing.”

“That’s not the only thing I find attractive about him,” Damona said defensively. “He’s a good guy, too.”

“Absolutely. So your goal is to appreciate the qualities that make him into the man you know and love, while also showing him that it doesn’t have to be that way at home.”

The way you do it is by first letting him know how his competiveness makes you feel. Essentially, he needs feedback. Not explanations, but feedback about the results he’s getting on the metrics he feels driven to succeed at.

Competitiveness doesn’t make him a bad person. What it does is make YOU feel bad.

So don’t shame him for it. Just let him know. You might say, “Hey, I know it’s fun for you to make this into a game, but when you brag about beating me, it doesn’t make me feel very good.”

Second, reframe the competition. Give him a new challenge to “win” at.

The new challenge is to catch himself turning things into competitions and to use his creativity to figure out some way to make you feel like a winner instead. That’s his new goal if he chooses to accept the challenge.

Instead of competing against each other, set goals for you to achieve together as a team. A team that’s trying to have the best relationship ever!  ?

Even the most competitive athletes know they don’t win unless the whole team wins.

Finally, respect what his competitiveness does for him.

Men often believe that they HAVE to win all the time … or risk losing the respect of the woman they love. No man wants to be a loser. Or worse yet…pitied by his girl.

So love him harder when he doesn’t win. Tell him your love is based on WHO he is, not what he achieves. Besides, he’s already won the most important thing of all: