3 Myths About Single Life That Keep You From Being Happy 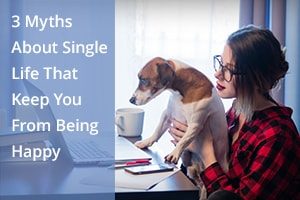 Everyone knows it’s hard being single.

It’s lonely, you keep putting yourself up for rejection, and it often feels as though all the good men are already taken.

But what if you looked at single life from a different angle?

That’s where two of the world’s most well-known spiritual leaders come in.

In 2016, The Book of Joy was a runaway bestseller, documenting a week of conversations between the Dalai Lama and his friend Archbishop Desmond Tutu.

Now, dating wasn’t on the list of topics covered. The discussion centered on how we can be happy in a life filled with suffering.

Which isn’t all that far from how to find happiness even when the perfect love seems like a distant dream.

Despite their different backgrounds, these two great men kept coming back to the same theme:

That’s not just a spiritual truth. It’s a scientific one as well.

Even more so than intelligence, money, or good genes, social ties contribute to a longer life. In fact, the study participants who were happiest with their relationships at the age of 50 were most likely to reach 80 in good health.

But what if you’re single?

Are you doomed to unhappiness?

That’s where the Archbishop and the Dalai Lama have some unconventional wisdom to share.

Let’s see how their advice shatters some of the myths about being single.

Myth #1. Being single is a lonely experience.

When you’re at a party and you’re the only one who’s single while everyone else is coupled up, you do feel alone. You feel left out. You feel the painful absence of someone at your side.

Loneliness is a result of focusing on yourself. You can end that loneliness in an instant by switching your attention to the people around you.

The Dalai Lama asks how any of us can feel lonely in a world of 7 billion inhabitants. We are surrounded by brothers and sisters. But when we think too much about ourselves, we isolate ourselves. We cut ourselves off from the experience of community.

The solution is something he calls warmheartedness. It means opening your heart to those around you with an attitude of friendliness and kindness.

So, if you’re starting to get that “single feeling,” look around for someone to connect with. It doesn’t have to be a handsome single man. It could be someone who’s in need of a friendly face just as much as you.

Myth #2. Rejection and heartbreak are to be avoided.

No one wants to be rejected.

That’s why so much dating advice focuses on ways to avoid ever getting rejected again. Wouldn’t relationships be easier if you never got your heart broken?

He thinks heartbreak and suffering play an essential role in shaping our character.

If everything goes right for us all the time, then we never have the chance to develop resilience. We don’t appreciate joy as much. And we may not feel as much compassion for those who are also suffering.

In fact, tough times play an important role in bringing people together

“We don’t really get close to others if our relationship is made up of unending hunky-doryness,” the Archbishop explains. “It is the hard times, the painful times, the sadness and the grief that knit us more closely together.”

Myth #3. Dating is a competition.

When you look at all the other single women out there, it can feel like you should give up now. Why would he ever pick you out of the crowd? If you don’t ask him out right away, some other woman will snap him up.

Dating becomes a competition with winners and losers. It’s no longer fun.

That’s where the Dalai Lama can offer some advice.

He asks us to think of everyone we know as brothers and sisters. None of us are more special than anyone else. We all share the same common humanity: a desire to avoid suffering and enjoy happiness.

If we relate to people on that level, then we don’t put anyone on a pedestal. Just like you, the guy you’re interested in wants to be happy and suffer as little as possible. You can relate to that. You’re more alike than different.

Similarly, all those women who seem like competition are in the same boat as you. They just want to find love. Surely you can take pleasure in their happiness, knowing it doesn’t diminish yours.

From this perspective, being single doesn’t have to cause suffering. Rather, it can bring out the best in you. Just keep your focus on connecting with others. Joy lies ahead.