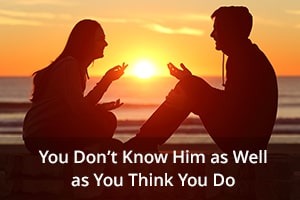 You can tell what he’s thinking, even when he doesn’t say a word.

You can finish each other’s sentences.

You’re in tune with him like no one else.

Knowing each other so well that words aren’t necessary.

But if this is true, then why are some researchers saying it’s a problem?

Who Knows Him Best?

But that’s not what researchers found.

Dr. Kenneth Savitsky of Williams College in Massachusetts conducted three different experiments to look at whether knowing someone well gives you a communication advantage.[1]

In each experiment, the answer was no.

Or put you at a disadvantage.

“Some couples may indeed be on the same wavelength, but maybe not as much as they think,” Savitsky said. “You get rushed and preoccupied, and you stop taking the perspective of the other person, precisely because the two of you are so close.”

You’re confident that you understand exactly what your guy means…

But that doesn’t mean you necessarily do understand him.

This is known as the closeness-communication bias.

When you meet someone you don’t know, you’re not sure whether you share the same information or view of the world. So you explain yourself better. You listen better, too.

But when you’re talking to a loved one, you make assumptions. You don’t explain yourself, because you don’t think you have to. You rely on a kind of communication shorthand.

You think he said one thing, when in reality he meant something different.

You assumed you’d both agreed on something, whereas he thought you were still discussing it.

You expected he’d say one thing, but what comes out of his mouth next shocks you.

It’s one thing to misunderstand someone you don’t know very well, but misunderstanding a loved one comes at a cost.

You get upset with each other. You feel a sense of distance between you.

His mind, which has always seemed so transparent to you, feels indecipherable.

Do you even know this man?

And if you don’t know him at all, what does that mean for your relationship?

3 Ways to Understand Each Other Better

What the closeness-communication bias teaches us is that there are benefits to not assuming you understand one another.

It’s better to assume you need that extra communication, rather than assuming your relationship gives you special mind-reading powers.

Here are 3 ways you can avoid misunderstandings caused by the closeness-communication bias.

Has your guy ever said something to you that made you go, “Huh…?”

But you brushed over it and carried on with the conversation?

It takes extra effort to stop and ask him about what he said. It’s easier just to keep on talking.

But those moments are opportunities.

When you ask a question, you show your guy you’re listening. You show him that you want to know what he’s thinking. He feels flattered, and both of you feel closer than ever.

When they first get together, they spend hours talking about everything under the sun.

Over time, they assume they now know everything there is to know about each other. Their conversations revolve around practical matters, like what to eat or what to do this weekend.

But people change. None of us are the same people we were a year ago, let alone 5 years ago.

That means there’s always something new to discover about each other.

So keep talking. Asking simple questions like, “How was your day?” or “How are you feeling?” or “What did you think of that?”—and paying genuine attention to his answer—keeps the conversation rolling.

It can feel threatening to find out that you don’t know the person you love as well as you thought you did.

But it can also feel exciting.

Your differences create the spice in your relationship. They introduce an element of mystery and surprise.

So don’t worry when you find out that you and your guy aren’t on the same wavelength 100% of the time. You don’t have to be identical twins to be compatible.

Get curious about your differences. Don’t shut down when he says something you don’t expect (or don’t want to hear).

Understanding him better starts with accepting that there are things you don’t understand about him. Just because you’re as close as two people can be doesn’t mean you share the same mind.

That’s the lesson of the closeness-communication bias. Watch out for this bias in your communication with people…especially when you think you can predict what he’s about to say next.