Home > Commitment > Will the Amount of Money He Earns Affect My Future Happiness?

Will the Amount of Money He Earns Affect My Future Happiness? 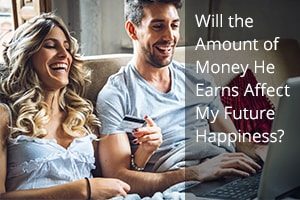 How much attention do you pay to a potential partner’s income?

You know what you’re “supposed” to say. You’re supposed to say it doesn’t really matter. That money can’t buy love. That you’re way more invested in the person behind the bank account than his current balance.

But there’s more to it than that, isn’t there?

When you talk to your bestie about the guy you’re currently seeing, you likely talk money. Maybe you say something about him “doing well,” or maybe you mention that he’s struggling, but a hard worker.

The point is, you notice. And I want to tell you that’s not just okay. It’s healthy and smart.

A recent study done by Purdue University backs this up. Researchers found that money can, indeed, buy happiness—to a point.

They speculate that a person has to have enough financial resources to feel secure (basic food and shelter needs met) in order to reach their highest potential for feelings of “emotional well-being.”

Beyond the point of having basic needs met, more money won’t make you happier. But below that point, a lack of funds can make it harder to be at peace.

It’s weird to think of it that way, but it makes sense. It’s pragmatic. Of course money matters. If you know you’re taken care of, you feel better. That’s true whether you’re single or sharing income as a couple.

One of the researchers was also quick to point out the need for balance. “Income is just one of the factors [that influence happiness], no more so than social interactions and finding a purpose in life.”

Would you like to know how to do that? Below are four questions to help you know how important his bank account balance will be to your future happiness.

Where are you in your life and career?

If you’re fresh out of college and just barely scraping by, you may not care whether or not he’s loaded. But if you’re well into your career, stable and established, it might matter a little more.

The greater the distance between where both of you are professionally, the greater the chances that distance will create conflict. Who pays for what? What if your way of making big monetary decisions is completely different than his? Relationships need alignment.

A relationship can work if one of you is rich and the other is not, but you should at least acknowledge the challenges that brings.

What kinds of experiences do you value?

If traveling is your passion, will it really work to hook up with a guy who can’t afford to explore the world with you? The same goes for other activities that require cash—fine dining, the theater, luxury services (like a spa day) or even shopping.

If you don’t really care about that stuff, then the state of his wallet may not be an issue. Plenty of successful women are just as happy in sweat pants watching movies on the couch as they are at the mall.

You get to decide what matters to you. If your list includes activities that require money, that’s something to consider.

How important is it for him to spend money on you?

I want to assure you that it’s okay to want him to spend money on you. That doesn’t make you a gold-digger. Gifts and extravagant experiences matter to some. There’s nothing wrong with that.

Receiving gifts is a legitimate love language. What you need to determine is how much those things matter to you.

If you’re going to feel neglected when he can’t afford to shower you with gifts, then there will always be an underlying tension in the relationship. It’s far better to accept that receiving gifts is one of your main love languages than to try to hide it.

What else matters to you?

Money’s hardly the end-all-be-all when it comes to happiness. Like we said before, it’s part of the equation. Not the whole equation.

What else are you looking for? What constitutes “the total package” for you?

His income is part of that picture—and so are other things, like intelligence, core values, interests, spirituality, politics, life goals and more. It’s all interconnected. Never shortchange yourself by failing to take all those factors into account.

Money is something of a forbidden topic when it comes to love and relationships. It shouldn’t be. It plays a role.

Instead of ignoring it or pretending it doesn’t matter, take the time to think about how his financial status impacts your relationship goals.

You want a romance that’s fulfilling in as many ways as possible. And I believe you can have it!