Why Your Flirting Style Matters 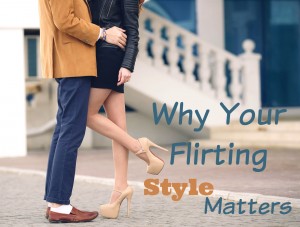 Which style of flirting do you use most?

Research at the University of Kansas with more than 10,000 people revealed five distinct flirting styles.

It turns out the type of flirting you use can influence the types of relationships you end up in.

Dr. Jeffrey Hall is the professor at the University of Kansas who directed the research team and analyzed the results.

While there’s no right or wrong way to flirt, it turns out some of the flirting styles are more effective than others, depending on what kind of results you’re hoping for.

Here are the five flirting styles his research team identified:

Playful Flirt: A silly kind of flirting that involves a lot of playful, game-like interactions that make it seem almost like flirting is a sport.

It’s a very casual style of flirting, and it can be fun for both parties.

However, this type of flirting seems to repel people interested in a serious relationship.

Polite Flirt: This is a style of flirting that is highly focused on exhibiting proper manners and polite interaction.

People who use this as their predominant style of flirting often miss the fact that other people are flirting with them.

They are very slow to pick up on flirtatious behavior from others, to a point that you almost have to ask them out directly before they realize you’re hitting on them.

The good news is, people who have a more polite flirting style tend to enjoy longer, more meaningful romantic relationships.

Physical Flirt: This flirting style is primarily about using body language to suggest interest on a physical level (or to arouse the physical desire of your target).

In Dr. Hall’s research, people scoring high on this category of flirting behavior often ended up developing relationships quickly and with more physical chemistry with the people they end up with.

The downside is they often annoy others with their flirtatious body language, sometimes even coming across as someone who is a little too full of themselves.

Sincere flirt: If you’re looking for the flirting style that is most effective overall, this is it.

This person flirts with their words, focusing on getting to know the real you.

The focus of their flirting style is to develop an emotional bond with you in hopes that physical chemistry will take care of itself later on.

Flirting with this style tends to yield meaningful relationships that are more likely to be emotionally satisfying.

A man using traditional flirting methods will open doors, take the initiative, and generally play the part of the polite but insistent pursuer.

A woman using this flirting style will be very passive.

According to Hall’s research, men were least likely to endorse this style of flirting.

There are more women using this style of flirting than men.

That poses a problem.

By taking a more passive role in dating, women end up missing the chance to connect with most men, since so few modern men adopt this style.

It really only works well if there’s a man whose flirting style compliments a passive role.

Everyone uses some aspect of nearly all the flirting styles.

But in case you almost exclusively land in one of these categories, I thought you might be interested in an opportunity to easily expand your flirting skills.

I’ve put together a brief report that summarizes the basics about effective flirting.

Regardless of your flirting style, I believe I can help you to feel more relaxed and more confident about flirting.

Follow this link to learn more about my concise report on flirting.

With just a small investment of time, you can reap a lifetime of rewards.

Learn how to flirt with a man you’ve been married to for 20 years.

Learn how to flirt with someone you met five minutes ago.

Once you understand the underlying mechanisms of flirting, it will seem easy and fun.