Why You Should Hold Out for an Apology from Your Guy 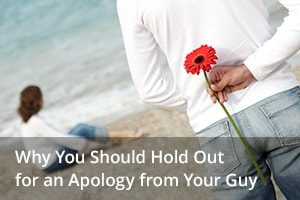 You probably have at least one female friend who’s a bit too quick to forgive.

When her guy says something that hurts her feelings, she laughs it off. If he’s consistently late for dates, she just shrugs and says he’s got a busy schedule. She might even let big stuff go without a fuss. Stuff like flirting with other women right in front of her.

I suspect you have at least one friend like this because everyone does. We all know someone who holds in their feelings, rarely expressing anger even when it’s called for.

If you’re being nice, you’d say your friend is “long-suffering.” But really, she just lets the guy in her life get away with things he shouldn’t be getting away with.

It might be tempting to think she just has bad taste in men. But that’s not necessarily the case.

According to a recent study[i], people are more likely to repeat negative behaviors if forgiveness is offered immediately. The thinking goes like this: “If you’re not mad, it must not be a big deal, so I’ll keep doing it.”[ii]

In other words, we teach the people around us how we expect to be treated. And when you forgive others too quickly, you teach them it’s okay to treat you poorly.

If you don’t want to make the same mistake your long-suffering friend makes, it’s important to hold out for an apology when your guy screws up.

Here’s a three-step plan for doing that without looking like you’re just holding a grudge.

You’d be surprised how many people, both men and women, shy away from letting others know they’re upset.

If your partner has said or done something that hurt you, you should be able to tell him. Mature relationships can handle that kind of feedback. Besides, he’s never going to change his behavior if he doesn’t know it really bothers you.

So be positive about the relationship’s long-term future, but be open about negative feelings as they come and go.

Sometimes that just means saying you’re upset or disappointed. Sometimes it means showing him you’re upset. It’s okay to let him SEE you’re angry, but always treat him with respect, even when you’re feeling angry (just as he should do for you).

Of course, you don’t want to make a bad situation worse by showing too much anger. If you take things too far in step 1, you’ll end up owing him an apology!

After you’ve BRIEFLY and APPROPRIATELY shared how you feel, ask for some space.

That might mean doing something as simple as excusing yourself to the ladies room for a few minutes. If the offense is big, you may want more time.

Taking some time will help you come down off the emotional surge, but it will also give him an opportunity to process your reaction. It lets it sink in that this really bothered you. It will help him to not forget it.

This is his chance to side step defensiveness (the knee-jerk reaction we all have when criticized).  Hopefully, he will want to set things right.

After you regroup, he’ll be far more likely to offer an apology. When he does, that’s the time to accept it.

But before the two of you move on, take a moment to ensure he really understands the root cause of your negative emotions.

Say something like, “Thank you for your apology. It’s okay. I just want you to know that when you __________, it really hurt my feelings because it made me feel __________. I forgive you, but I just want to make sure you understand why this affected me the way it did.”

Forgiveness is a good thing. It’s essential to a healthy relationship. But if you’re too quick to forgive, he may not take the issue seriously.

So, work toward solutions.  And consider that he may have experienced things differently.  But don’t let him off the hook just to smooth things over.  Talk it through so you can put it behind you.

When you do that, you turn minor mishaps into real growth opportunities, and you remind him it’s important to treat you like the amazing woman you are.

[i] Mcnulty, J. K., and V. M. Russell. “Forgive and Forget, or Forgive and Regret? Whether Forgiveness Leads to Less or More Offending Depends on Offender Agreeableness.” Personality and Social Psychology Bulletin 42.5 (2016): 616-31. Web.