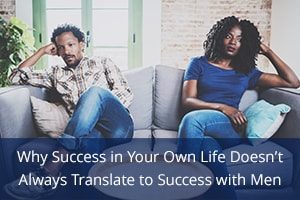 If you’re attractive, gracious, and wise in the ways of the heart, then you must be a great catch. And that means men should be attracted to you instantly. Right?

But instead you’re getting hardly any messages on your online dating profile, while other women who aren’t on your level are getting chatted up right and left.

Self-doubt creeps in. The only possible explanation is that you’re doing something wrong. But what?

So you do more research. You read newsletters like this one. You pore over every aspect of yourself, searching for the single flaw that’s turning off men.

A lot more women study what turns men off…

Compared with the number of men who study what turns women off.

Think there’s something strange about that?

I could have called this article “The #1 Thing Women Do That Turns Men Off.”

Because that’s not the message I think you need to hear.

The women who struggle the most are often the SUCCESSFUL ones.

Being a successful woman makes your job harder.

The more work you’ve invested in yourself, the better you are at what you do, the more your pool of suitable mates shrinks.

You’re not content with dating someone who just sits there with nothing interesting to say. You want to date someone on your level. And those men are few and far between.

I think there’s a different reason finding love is harder for successful women, though.

It’s not just that there are fewer men on their level.

Rather, it’s that they’re doing something that isn’t working as well as they’d expect.

You could call it a “mistake.” But I prefer to call it a “less successful tactic.”

It’s a strategy that can get you far in life, but in love it always backfires.

So what is hustling for worthiness?

The term comes from shame and vulnerability researcher Brené Brown.

In her Oprah-approved bestseller The Gifts of Imperfection, she writes:

“Well, that’s easy,” you might think. “Of course I believe I’m worthy of love and belonging!”

If you truly believed in your own worthiness, why would you try to impress a man?

If you knew you were good enough just as you are, why would you try to “fix” or “improve” yourself so that men like you better?

A lot of dating advice encourages you to strive for worthiness.

It implies you’re not good enough just as you are. You have to “fix” your flaws before you can be worthy of a quality man’s interest.

And women who are successful—who want to be the best at everything they do—are particularly susceptible to that message.

They know that the journey to success involves impressing other people.

According to Brené, we do that by “performing, perfecting, pleasing, and proving.”

And it feels so good.

When you achieve the success you’ve always wanted, you know beyond the shadow of a doubt you ARE worthy. Your achievements speak for themselves.

But that’s not where worthiness comes from.

A woman who believes in her own worthiness doesn’t hustle on a date.

She simply is. She shows up. She experiences whatever there is to experience.

And he relaxes, knowing that he doesn’t have to act like a judge on “American Idol” and decide whether she’s going to the next round. 😉

Dating isn’t a competition. There’s no prize for attracting the most men.

There’s nothing to win.

There are simply two people, right here, right now, discovering whether they have a heart connection.