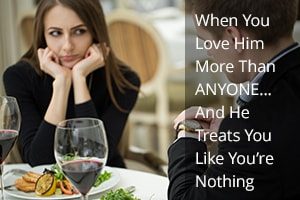 They’d never really been in a relationship. He wasn’t the settling-down kind. But every time she went out with him, she felt like she was playing the star role in her ultimate fantasy.

Donovan was everything she thought a man should be. Slick, powerful, handsome, and possessed of immaculate taste. He didn’t drink tequila; he drank Patrón. He didn’t wear jackets; he wore Tom Ford.

But Donovan wasn’t as into her as she was into him.

He’d text her at the spur of the moment—when, she suspected, his intended date had canceled on him.

He’d act totally into her, unless someone else he knew walked into his field of vision. Then he’d leave her hanging, sometimes for half an hour while he shot the breeze with his friend.

She wanted my advice on how to make Donovan obsessed with her.

It’s my job to help my clients get what they want. But it’s also my calling to help them step into their biggest, brightest, most beautiful life.

And Laila wasn’t going to have that with Donovan.

Donovan was pretty clear about his priorities. Women were accessories to him. He wanted them around so that he looked good, but his focus was on wheeling and dealing. Being seen. Hobnobbing with the right people.

If I told Laila she should forget about Donovan, she’d hear me saying she wasn’t good enough for a man like him.

So my goal was to help Laila see just how much she deserved from a man.

I’d leave it up to her to decide who she’d practice her new skills on.

When a woman is obsessed with a man, she often uses a strategy I call “Look How Much I Have to Offer You.”

She shows him just how far she’s willing to go to earn a place at his side.

She invests time. Emotional energy. Money. Everything she has into giving their budding connection the perfect conditions to grow.

He takes all she has and smiles. This is great, he thinks. I’ve got it made.

In her effort to show him how easy-going and undemanding she is, she doesn’t ask for anything from him aside from his presence.

She wants to be with him. That’s it.

So it’s confusing—and heartbreaking—when he refuses to give her even that.

Men do this, too, by the way. They bring a bouquet of three dozen roses on the first date, send romantic texts every hour on the hour for days, offer to take her places or run her errands or wait for her until she’s ready for a relationship—even after she’s told him she’s not interested.

Because that’s the cultural story we have inherited about the right way to win our true love. It’s a story that’s reinforced in many fictional books and movies.

If a man just lays on the romance thick enough—and he never gives up—he’ll eventually wear her down, and in a moment of vulnerability she’ll fall in love with him.

You know as well as I do that there’s no WAY that script is healthy. It doesn’t work. It borders on stalking. (I’ll tell you a script that works in just a bit.)

But it can be hard to give up the hope of being with the person of your dreams.

Even more so if that person has rejected you over and over again.

Unrequited love turns off that healthy part of our personality that knows when something isn’t going to work out—and probably shouldn’t work out.

It turns on something darker.

The more rejected we feel, the more we become angry. The more we believe we shouldn’t be treated like that. The more self-righteous we feel in our use of aggression or manipulation to get our way.

At that point, it’s no longer about him.

It’s about what he represents.

The life you SHOULD have.

The life he (or his new girlfriend) STOLE from you.

It’s about all the lost opportunities in your life—from the boy who stole a kiss then ignored you in third grade, to the high school boyfriend who dumped you without a backward glance.

Yes, those experiences are painful.

But they’re learning experiences, too.

I encouraged her to start reclaiming in herself the traits she admired in Donovan.

The ability to choose whoever she wanted to be with.

The ability to ask for the best.

She didn’t need him to feel powerful. She already WAS powerful.

What can you learn about yourself from the men you’ve been obsessed with—if any?

How can you claim those traits for yourself?