Home > Commitment > When Something Doesn’t Feel Quite Right

When Something Doesn’t Feel Quite Right 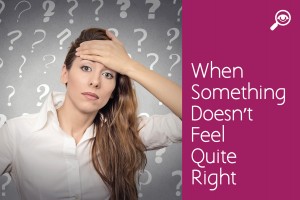 You know more than you think.

Female intuition is powerful. It can be considered a woman’s “sixth sense.” If you’re not using it in relationships, you’re missing out on an important source of information.

For example, have you ever felt as if your relationship was falling apart, but your partner gave you no indication anything was wrong?

One survey[1] found that most men take a month to plan a breakup. That means you could be stuck with a man who’s already emotionally left the relationship for four weeks until he finally bothers to let you know.

Should you be ignoring those warning bells going off in your gut? Absolutely not.

The survey isn’t the first to suggest that men stay in relationships they don’t want to be in, simply because they can’t figure out how to end it.

All of us have been guilty at times of “relationship apathy,” the desire to keep things as they are because it’s too much effort to change. Even if a relationship isn’t perfect, many people feel it’s better than being alone.

Still, if a relationship isn’t working, you should know right away. You shouldn’t have to wait for him to spring the news on you.

Luckily, you have a fantastic relationship detection device:

Female intuition is no myth. Women are better at reading subtle nonverbal cues including micro-expressions, tone and posture. Women excel in reading other people’s emotions and tend to rate highly in emotional intelligence.

But many women don’t trust their own intuition. If they have a sense about something but can’t explain it, they tend to dismiss it.

For example, you may feel uncomfortable around someone but be unable to explain why. You may even feel annoyed at yourself for harboring unkind thoughts. You can’t see why that person would be a threat, so you ignore your instincts.

Ignoring your intuition comes at a cost.

Many women have a hunch that their partner is cheating well before they come across any evidence. Other women sense their partner has withdrawn, but they rationalize it away with excuses. He’s busy at work, he’s got a lot going on, he’s getting older, etc.

Sometimes you can’t explain why you feel the way you do. That doesn’t mean your feelings aren’t valid.

Still other women dismiss their intuition because it’s telling them something they don’t want to hear.

If you sensed that your partner was cooling off, or that something was wrong in your relationship, what would you do?

The first three are the easiest strategies, because they don’t involve any risk. If your intuition is wrong—and you hope it is—then there’s no harm done.

The fourth option is the riskiest. Not only do you have to bring up the possibility that there’s a real problem between you, but you have to confront it squarely.

Very few of the women I consult with choose this option, but it’s the best of the four. Here’s why.

Communication problems are the biggest cause of divorce, according to a poll of mental health professionals.[2] And those problems start when a couple is dating.

No one wants to be the one who broaches difficult topics. No one wants to take the risk of saying something that would upset the apple cart. It’s easier to avoid certain topics and pretend everything is okay.

As a result, couples struggle to identify and resolve small issues. And those small issues snowball into something bigger. They can become issues that threaten the relationship.

Your intuition is on your side, giving you hints and nudges about possible areas of concern.

But if you ignore your instincts and pretend everything is okay, you end up perpetuating the code of silence. You turn down the chance to deal with potential problems before they become serious.

The best solution is always to talk to your partner.

Frame your concern in a positive way. Say, “I want us to feel closer, and I was thinking we could do X. What do you think?”

Or you might say, “It feels like we don’t have as much fun as we used to, and I’d like to change that. I was thinking we could do Y. What do you think?”

By being open about how you’re feeling, taking responsibility for it, and suggesting action steps, you get him on your side. You’re enlisting his help, not accusing or blaming.

So don’t ignore your instincts. Talk about it. It just might save your relationship.