Home > Commitment > When His Friends Are a Bad Influence on Him

When His Friends Are a Bad Influence on Him 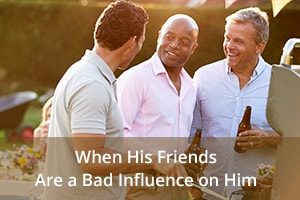 What would you do if you caught your man sitting quietly among his friends as they engaging in “locker room talk” that was disrespectful to women?

He’s not participating in it, but neither is he calling it out as the harmful and inappropriate thought pattern it represents.

Would you call him out on it?

Would you let him off the hook, because “men will be men” and it wasn’t him doing the talking?

As a relationship coach, I’ve seen many discussions between couples about behavior they regret. While there are all kinds of excuses (most of them pathetic), I have seen a trend worth noting.

The trend is that some of the nicest, most loyal, and kind people do dumb things that hurt their partners, and it’s often related to negative peer pressure.

Instead of focusing on that one incident, ask yourself what your guy’s friends can teach you about him.

Friendships tell us a lot about people.

You may have heard the saying that we’re the sum of the 5 people we spend the most time with.

Which means you can look at your guy’s closest friends to find out important information about the sides of himself he doesn’t show you.

We all have aspects to our personality we’d rather keep hidden. They represent our shadow side. We started developing our shadow side as children, when we discovered that our parents and other adults didn’t approve of certain things we did or said.

We couldn’t wave a magic wand and make our “badness” vanish. It was part of us, just as much as our goodness. So we shoved those parts of ourselves down and tried to forget about them.

Because what you refuse to acknowledge about yourself ALWAYS comes out in other ways.

Like finding friends who act out in ways you’d never allow yourself to do.

Ever wondered what your guy sees in certain friends?

Maybe he sees aspects of himself he’s not allowed to express.

Aspects of himself he buried long ago.

Your man’s friends tell you a LOT about the man he thinks he is and the man he wishes he could be.

Look at what your guy admires most in his friends. Listen to how he talks about his friends. Notice what he does with his friends when they spend time together.

The science of how social networks impact health is still in its infancy, but thus far it has shown that everything from obesity to smoking to happiness spreads through social networks.

Research has found that couples are 75% more likely to divorce if a close friend gets divorced.

Even if a couple just HEARS about the divorce of someone they know through the grapevine, their own chances of divorce go up by a third.

So if your guy’s friends don’t believe in marriage, treat their partners poorly, or disparage women, then their influence can rub off on him—even if he doesn’t share their beliefs.

The answer is not to get rid of his friends.

You may wish they had less influence over him, but they’re part of his life.

Increase the amount of time you spend with strong couples.

Couples who regularly spend time with other couples tend to feel more satisfied with their own relationship.

Spend time around couples you consider to be role models. Couples with positive, healthy, inspiring relationships.

Talk about the challenges of relationships together. It may be reassuring to know that even couples who look great on the outside struggle on the inside.

The more time you spend with couples who have the kind of relationship you’d like to have, the more their positive influence rubs off on you.

But what if you don’t know any couples like that?

Then you’ve got to start “courting.”

But instead of looking for another partner, you’re looking for other couples who might be a good match.

Make the effort to meet people outside your usual social circles. Join a meetup or community group. If you meet a couple you admire, work up the courage to ask them for dinner.

Your guy will probably never ditch his friends. And those friends may always bring out the worst in him.

But that doesn’t mean he won’t be influenced by his new friends.

Friends who can help both of you step toward a higher vision for your relationship, one founded on respect, appreciation, and love.