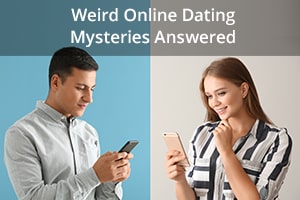 Ever wondered about some of the more curious aspects of online dating?

Like why some men write mini-essays to you while others make do with, “Waz up, babe?”

Or why some men come off as jerks from the get-go, despite the fact they’re supposed to be trying to win you over?

Or why men in their 50s focus on younger women, to the extent that they don’t even bother messaging women their own age?

Then talk to Elizabeth Bruch.

She’s a sociology professor at the University of Michigan, and she can tell you all about “aspirational pursuit of mates in online dating markets.” In fact, she just published a study on that very topic.[1]

After studying thousands of interactions between 186,000 men and women on a popular dating site, she concluded this:

We can’t stop trying to date out of our league.

Why Men Think They Can Score Someone Out of Their League

“The vast majority of men send messages to women who are more desirable than themselves on average,” Bruch and her co-author M. E. J. Newman write.

Anyone who’s ever dated online can see this in action.

Ever looked at the profile of a man who messaged you and thought, “What planet is HE living on?”?

But that’s not how online daters think.

And that includes women.

Both men AND women tend to message partners who are exactly 25% more desirable than themselves.

They hardly ever message anyone they consider less desirable.

So when you get a message from a guy who’s nowhere near your league, don’t get annoyed. This is just how it works.

“Messaging potential partners who are more desirable than oneself is not just an occasional act of wishful thinking; it is the norm.”

Does that explain why so many 50-something men are setting their sights on 20-year-olds?

I’m going to quote from the study here, because there’s no way of putting this delicately:

“The average woman’s desirability drops from the time she is 18 until she is 60. For men, desirability peaks around 50 and then declines.”

Which means that 50-year-old men are hot stuff online. They think they can get a younger woman because they’re getting so much attention themselves.

Does that match up with your experience?

A guy friend turns 40 and finds he starts doing really well online. You turn 40 and discover that your matches drop off precipitously.

Why Guys Can Be Such Jerks at First

The first message you get from a guy is the most important.

If you don’t like the sound of him, you won’t reply. He’s wasted his time AND put you off him.

So it would make sense for men to put a little time and effort into crafting a message that gives you a positive first impression.

But that’s not how it works.

You get these short, sometimes rude first messages because they actually WORK for the men sending them.

It’s not an effective use of time for a man to craft a witty, eloquent message to each woman he’s interested in. He hears back from less than 10% of the women he messages.

And he’s the one who has to do most of the leg work. More than 80% of first messages are initiated by men.

So it makes sense for men to invest as little time as possible in each message, going for quantity over quality.

But there’s an interesting twist…

The more desirable the woman, the more the man wants to impress her. So he writes a longer message.

He’ll write up to twice as much to a woman he REALLY wants to impress.

Does that work for him?

Nope. In this study, women were less likely to respond to longer messages. (The only exception was Seattle, where women like a bit of romantic verbiage.)

Men also find that it works against them to be too positive in that first message. The more positive words they use, the less likely they are to get a response.

I guess those curt first messages are here to stay.

What You Can Take Away

So what does this mean for you?

Here are some positive takeaways from the study:

And if you like men who woo you with words, move to Seattle. There are twice as many men as women in some areas, putting odds in your favor.