Use Moments of Awkward Silence for a Surprising Advantage with Men 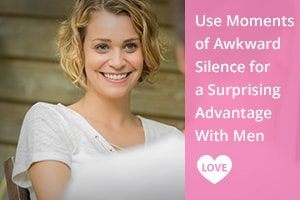 Let me show you why.

Let’s look at a sample conversation where two people are trying to make a connection.

MAN: I don’t think I’ve ever seen a neon pink-orange drink before.

WOMAN: I know, right? It’s like radioactive Kool-Aid. But it tastes amazing!

MAN: (laughs) It is like radioactive Kool-Aid. I feel like the Kool-Aid Man is gonna burst through the wall any second.

WOMAN: Nice to meet you.

WOMAN: And what are you drinking?

MAN: Water, unfortunately. My friends picked me as the designated driver.

WOMAN: So what do you like to do when you’re not asking women about their drinks?

WOMAN: You know, for fun. Or work. Or, just, whatever.

WOMAN: Like, for example, I’m failing horribly at learning to play the guitar. How do people do it? They make it look easy, but let me tell you it is not…

This isn’t an awful conversation. There’s some banter. Maybe some chemistry.

Ken has no problem getting Julie talking. And she always seems quick with a reply.

But Julie does have some trouble there at the end.

Those pauses! Were they bothering you? Because they’re clearly killing Julie.

Whenever there’s dead air, she has to jump in. By the end, it seems like she’s taken it upon herself to keep the conversation going.

If you follow my blog, you already know you want to get the other person talking. This is true even if there are lulls in the conversation.

I’m going to explain why those lulls can actually be a good thing. But first, let’s understand why they happen.

There are the obvious reasons, of course. People don’t know what to say. They get intimidated. They get stuck in their head.

But science says there’s another reason for lulls when men and women talk: On average, women’s brains work faster than men’s.

It has to do with how our brains are set up. Which parts we use in conversation.

It’s not important to know the exact details. But you should know that these differences mean men can be slower to respond in conversations.

So those seemingly interminable pauses? It might just take his brain longer to think of a response.

Which brings me to why lulls can be good.

We assume that a conversation lull is a sign of boredom. Of disconnection.

But if a man doesn’t respond for five seconds or so, the opposite is often true.

His brain is working hard to process what you said. To come up with a great response. To find a way to connect.

So moderate lulls can be good. Because they show you he’s engaged.

But it’s what you do with a lull that matters even more.

If you rush to fill in the silence, he may feel interrupted. Pressured. Frustrated. Embarrassed. Like you feel he needs help to hold his ground in the conversation.

Give him the space he needs to resolve the lull himself. He’ll feel respected. Liked. Valuable.

And it will make him trust and appreciate you as well.

All of which can lead to feelings of connection on both sides.

So the next time a guy doesn’t answer as quickly as you’d like, I want you to do something simple: count to five silently in your mind.

Use the time to center your mind on positive thoughts. Or sip from your drink. It doesn’t really matter what you do.

Just give him time. You might get a lot more back than you expect.