Turn Toward Your Partner to Stay Connected 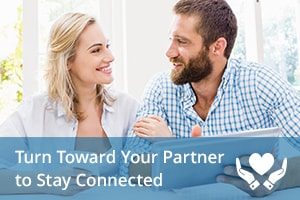 You’re not sure what to do.

You’ve had a fight, and you haven’t spoken since. Which isn’t great, considering that you live together. You’ve managed to share the same space without making eye contact once.

As you’re walking past the living room, he says, “Come and take a look at this.” He’s sitting on the sofa, focused on the iPad on his lap. You walk over.

It’s something banal, some picture of something vaguely interesting. You make the expected noises. “Uh huh, cool.” You’re not sure why he called you all the way over here to look at it.

Then he looks up at you. You make eye contact for the first time in days. You smile spontaneously.

And you get it:

This was his way of making it okay again.

There’s actually a technical term for what just happened.

It was a bid for connection.

Bids for connection happen when one partner tries to engage the other, hoping for some positive attention.

They’re rarely as obvious as, “Hey, do you have a minute to talk?” or, “I’m feeling disconnected from you, and I want to feel connected again.”

Instead, most bids for connection happen under the radar.

You sigh, hoping he’ll ask you what’s wrong. He shows you a funny clip on his phone, hoping you’ll laugh. You start talking about this crazy thing that happened to you today, hoping he’ll listen with interest. He pulls you next to him on the sofa, hoping it will lead to snuggling.

Bids for connection always have an ulterior motive:

Which should always be a good thing, right?

Try out this scenario.

You’re cooking dinner. Every burner on the stove is full of pans bubbling and hissing. You’re chopping salad, toasting bread, stirring the sauce, trying to get everything done at the same time.

Do you think: “That’s a bid for connection, so I should respond positively”?

Or do you think: “What a jerk! Does he think dinner cooks itself?”?


Bids for connection can come at precisely the wrong time. When you’re busy, stressed, irritated, and frankly not in the mood.

You’re not a bad person if you don’t respond. But you might want to pay attention to how often you turn away from his bids and how you do it.

How you respond to his bids for connection—and how he responds to yours—has a measurable influence on whether your relationship will last.

If you ignore each other’s bids for connection two thirds of the time, then you’re in the danger zone. There’s a very good chance you’ll split unless you change this pattern.

On the other hand, if you make the effort nine times out of ten, then you’re in the golden zone. Your relationship is on solid ground.

Those figures come from Dr. John Gottman, a psychologist and leader in the field of marital stability. He studies couples in crisis with the goal of being able to predict who will split and who will stay.

Gottman found that there were two possible responses to bids for connection: turning toward or turning away.

You can turn toward a bid for connection without having to drop what you’re doing. “I’d love to see that!” you shout over your shoulder. “Show me after dinner’s ready.”

What you want to avoid doing is turning away.

For example: “I’m cooking at the moment, can’t you see?” Or “What is it, another one of those dumb jokes?” Or completely ignoring him, knowing he’ll have forgotten it in a minute anyway.

Even the strongest couples turn away from bids once in a while. Sometimes, it’s by accident. They don’t even notice that the other person has made a bid for connection until it’s too late.

You’re sitting at the kitchen table writing out a to-do list for tomorrow when he walks in. “Hi, honey!” you say. “Gosh, it’s cold out,” he responds, unwinding his scarf from around his neck. “I wonder what the best way to get warmed up would be.”

You’re so busy thinking that you don’t even really hear him, let alone catch that mischievous glance he just gave you.

We all miss bids sometimes. In strong relationships, the other person will repeat the bid until we finally hear it. But in rocky relationships, a missed bid feels like rejection.

So, do your best to pay attention to those opportunities for connection.

Watching that silly YouTube clip he wants to show you may not feel much like relationship building, but it is. Connection is made in those little moments.