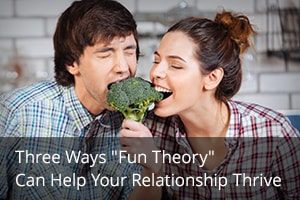 Have you ever tried to get excited about something you didn’t really want to do?

A friend of mine is a runner. Recently I admitted I simply don’t like running enough to tackle the long distances she does, and what she said floored me.

She said she doesn’t like to run, either. But she knows it’s good for her, so she finds ways to make it fun.

For her, that means listening to music, staying connected with other runners, and going absolutely nuts buying running apparel.

The folks at Volkswagen think along the same lines. They launched a program called “Fun Theory.” Fun Theory is the idea that “something as simple as fun is the easiest way to change people’s behavior for the better.”[i]

In one of their experiments, they painted a set of stairs to look like piano keys. The stairs were directly adjacent to an escalator, but they wanted to see if more people would opt for the stairs if the stairs looked more fun.

We’ll start with something genuinely annoying, but not too horrible. Making dinner plans.

It’s insanely common for couples to go into gridlock just trying to pick a restaurant. And since we only talk about where we’re going to eat when we’re hungry, irritation can build fast!

Instead of a never-ending cycle of “I don’t know, what do you want to do?”, try the elimination game.

Start by picking four places you’d be willing to eat. Ask him to eliminate his least favorite. Then you eliminate one. Keep going until there’s only one option left.

This simple, silly game will save you the headache of a lengthy decision without compromising either person’s opinion. Plus, you can use the same game in countless other decision-making situations.

2. Help Your Relationship Thrive When It’s Time to Do Chores

You and your guy likely inhabit the same space a lot, even if you don’t live together. At some point, someone’s got to do the dishes. Or walk the dog. Or take out the trash.

You get the idea.

You can make around-the-house chores more fun by creating a non-work environment while you do them.

For example, turn on some dance music and crank it up. Or talk about something light-hearted while you both pitch in. Or even race to see if he can finish the dishes before you’re done folding the laundry.

The key is taking the focus OFF the practical stuff that has to get done, and putting it ON having fun together.

3. Help Your Relationship Thrive When You’re in the Middle of a Fight

Humor can go a long way to lightening the mood, even when you’re in the middle of a knock-down-drag-out fight.[iii] But you have to be CAREFUL.

Mid-fight is a bad time to poke fun at him. He’ll feel disrespected, and the conflict will likely get worse.

But this is a great time to playfully make fun of yourself.

Picture this. Things are really heated, and you can tell you both need to calm down a bit. You could defuse some of the tension by saying something like, “Honey, I love you. I mean, not as much as I love shopping, but I do love you.”

Just one little joke, and the mood lightens. With a break in the tension, the way is paved for productive conversation.

There will be times in any relationship when you and your guy need to do something that, in and of itself, isn’t particularly entertaining. But you can make the “work part” of a relationship easier on both of you by adding some fun.

Whether you’re making a decision together, rolling up your sleeves to tackle chores, or even fighting, remember Fun Theory.

Anything is easier when you’re smiling and working together!