This Creates More Freedom in Your Life 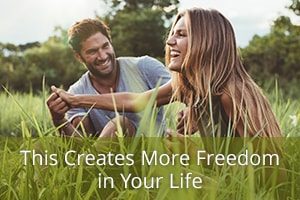 Is there something you KNOW you need to do…

But you just can’t seem to do it?

I mean something like looking for a new job. Or organizing your photos.

Or putting serious effort into dating.

We often put off things we dread or things that aren’t urgent. That’s normal. It makes sense.

But here’s what doesn’t make sense:

We even put off things that are important to us.

Things that would make a BIG difference to our lives.

Things that would make us happy.

Like picking up a paintbrush after years of having no time for art.

Or investing in a social group you’ve been on the fringes of.

Or agreeing to meet someone instead of mindlessly browsing profiles online.

We do this because there’s one thing scarier than the status quo:

All things considered, we’d rather do what we’ve always done. It may not work, but at least it’s predictable.

Change is Good (But Hard)

As a relationship coach, I want to create positive change in people’s lives.

But I face an uphill battle.

Even then, they may desperately WANT to change…

But some invisible force pulls them back.

It’s not a lack of willpower.

Back in 2002, a little book called The War of Art was published.

Its author, Steven Pressfield, was no creative writing teacher or self-help expert. Yet this slim book would come to redefine the conversation around what holds people back from expressing their gifts.

Pressfield believes that anyone trying to create something—whether it’s a work of art or a new life—encounters a powerful force determined to stop them. He calls this force “Resistance.”

This force never sleeps. It takes up residence in your mind as a litany of excuses as to why you can’t do that thing you know you need to do.

It distracts you, reasons logically with you, and—when all else fails—scares you.

If you start painting again, your work will be awful. If you ask to join that group, they’ll reject you. If you go out on a date, it will be a flop.

“Resistance is experienced as fear,” Pressfield explains. “[T]he more fear we feel about a specific enterprise, the more certain we can be that that enterprise is important to us and to the growth of our soul. That’s why we feel so much Resistance. If it meant nothing to us, there’d be no Resistance.”

Is Resistance showing up in YOUR life?

Is there something you feel called to do…

Then you need to do it.

Your fear is actually a green light, signaling you forward.

Fear does a great job at keeping people in place.

If you’re scared of doing something, you won’t do it. You won’t even try.

The higher the stakes, the more it matters, the harder it will be to take that first step.

What if you fail?

Even worse, what if you get it … but realize it wasn’t so great after all?

At least, from where you’re sitting, you can enjoy dreaming about it. Your dreams aren’t tainted by reality. You may even gain more pleasure from dreaming about the work than doing the work.

So how do you overcome that overwhelming urge to stay in your shell and never poke your head out?

You look Resistance right in the face.

You pin it down. You give it a name.

You do that by asking one simple question:

Why not do this thing? What’s stopping me? What am I afraid of?

For example, let’s say there’s someone you have your eye on. You’d like to ask him out, but you feel terrified.

What’s stopping you from asking him out?

Don’t have any clue how to do it? That’s a practical problem. Do some research. Make a plan.

Afraid he’ll turn you down? That’s a sign you need to dig deeper.

What would actually happen if he turned you down?

You’d feel rejected, for sure. It might change the tenor of your relationship.

But something good would happen, too:

No more wasting time wondering what would happen if you asked him out. Now, you know the answer. You can move on.

Resistance would have you believe there’s no point in trying unless you’re going to win.

Why ask him out if you think he’ll turn you down?

You do it to prove that fear can’t stop you. You gain tremendous freedom from overcoming resistance, because you realize you can do ANYTHING you want to do.