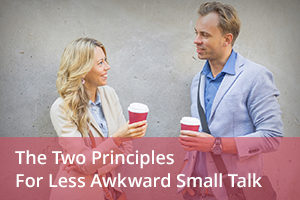 You’re out and about. You see a guy you’re interested in. You get his attention with welcoming body language. He approaches. Introductions occur. There’s a nervous, excited vibe between the two of you.

But what follows is just… nothing. Silence. Because neither of you seems to know what to say. How to start. How to draw the other person out.

Eventually you break the silence. Ask what he does. And he answers. With a single sentence. Followed by more silence.

So you ask if he likes his job. His answer: “Yes. It’s good work and I like it.” And then nothing.

Your brain races as you desperately grasp for things to say. Frustration sets in. Desperation. Embarrassment. Maybe even annoyance.

You blame yourself for not doing better. Or him for not trying harder. And it’s not long before one of you is looking for an exit.

The result: a missed connection. And probably more anxiety the next time a guy approaches. Because you do not want to go through that again.

We expect conversations to have a natural flow. A comfortable back and forth. To be smooth. Almost effortless.

Unfortunately, most initial interactions are not like this. There are stops and starts. Wrong steps as you feel each other out.

Especially if the goal is a romantic connection.

Because it makes both of you feel a bit anxious. So you’re more focused on not saying the wrong thing.

Which makes the conversation awkward. Stilted. And that can lead to one or both of you giving up and walking off.

Most people think that the secret to keeping a conversation going is to talk. But that’s not true. What you should do instead is get him talking.

You do this by using the principle of inspiration and invitation. And I’m going to show you how.

I’m going to start by illustrating these two principles in basic terms. To help you understand the core idea behind them. Then I’ll show you how to use them in a more advanced way.

Let’s start with Inspiration. This means saying something that inspires the other person to speak.

For the sake of contrast, let me first show you an example of dialogue that lacks inspiration:

And now here’s one using inspiration:

YOU: Yes, I really enjoyed the new Ghostbusters.

The difference is simple. In the second example you are giving him something specific to react to.

So never stop at “yes,” “no,” or “maybe.” Take it a step further by getting specific with your responses. Getting specific generates “inspiration” for your listener.  It makes it easier for him to know what to say next. It “inspires” a follow up comment.

The next principle is Invitation. This is more direct and literal. It’s where you make a direct request for the guy to respond.

Here’s a simple example without invitation:

And one using invitation:

Yep, that’s right. Invitation is just finding a way to literally ask a question or tell him it’s his turn.

Okay, so let’s take it up a notch!

Those examples were pretty basic. It’s likely you’re more sophisticated as a conversationalist. So how can you improve your skills with these two principles?

Here are a few more advanced samples of ways you can put the principles to work:

Now, you may still have trouble drawing him out. And the conversation could continue to have awkward pauses.

But now you have two valuable tools. Tools that can help to alleviate the problem. And if you continue to use them, you’re more likely to hit on something that interests him.

Which is ultimately the goal. Because that will make him more invested in the conversation. He’ll loosen up and become more willing to show you glimpses of his real self.

Accomplish that, and he’s far more likely to enjoy himself. All because you were able to keep him talking.

So when you hit a wall, remember those two things. Inspire. Invite.