Home > Commitment > The Truth about Men, Women, and Talking

The Truth about Men, Women, and Talking 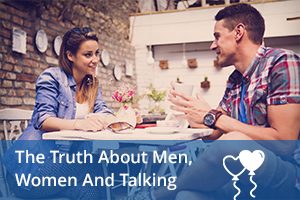 Is there a fix to this common source of couple’s conflict?

First, let’s consider the source of the problem.

There’s a common assumption that women talk more than men—much more! But this may not be true.

First, who talks more depends a great deal on the situation.

So if women do not actually talk more than men, what’s the real problem?

All couples have conflicts. But conflicts about communication are among the most common. Just ask any couples therapist!

In a typical scenario—

She says, “He is so shut down—he never shares his feelings.”

He says, “She’s always processing every little thing. Stuff that doesn’t even matter.”

He says, “I don’t really need to hear about every little detail of her life.”

Some researchers suggest that the amount of talking is not really the issue.

The real problem is how women and men feel about the presence or absence of communication in their relationship.

Have you ever been worried because your guy seems too silent? Have you even wondered if he’s hiding something? Maybe an affair? If so, you’re not alone.

For women, feeling great about a relationship has a lot to do with talking.

By contrast, men are far less likely than women to take talking into account when evaluating the quality of a relationship.

Okay, so let me show you what’s at stake in your relationship.

Women and men talk about the same amount.

But expectations for when you should or should not talk differ by gender.

Also, while women tend to consider talking to be a key ingredient of a strong relationship, men generally do not value communication to the same extent.

Okay, so what’s the fix?

Chances are that no one is going to solve this age-old dilemma. But the situation is not hopeless.

First, don’t assume that a silent man has something to hide. If he’s not talking, he probably just enjoys being in your company. Really!

Second, don’t assume that silence is equivalent to not listening. If he’s not talking, he may be listening more intently, contemplating what you share.

Finally, don’t assume that communication is only about talking. Communicating without talking can take many forms. Active listening is part of this equation. So are eye contact, touch and other forms of intimacy.

Finally, don’t forget that in many cases, actions do speak much louder than words.

If you get just one thing out of this discussion, let it be this.  Silence does not always mean something is wrong in your relationship.  Your man may just have less need to process his thoughts aloud.

But if you do want him to talk more, try this…

So grab hold of that quirk we men have.  Make it work in your favor.  Instead of launching into trivia about something a friend said, ask what he thinks it means.

Instead of describing details about your day, ask what he wants to plan for the weekend.

Instead of mentioning something you heard on the radio, challenge him to guess your three favorite radio stations.

What do these three examples have in common?  A mission.  A tiny little mission that engages his desire to talk.