The Simple Mind Hack that Can Change the Way You Date 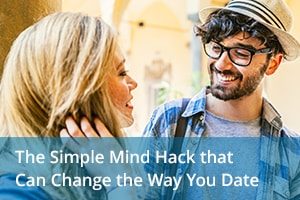 How do you feel about dating?

Depending on when you’re asked that question, your answer might change dramatically. That’s because dating is a mix of wildly different experiences.

Dating is all of those things and more because dating is an EMOTIONAL experience.

Which is good! One of the things that makes romance so fulfilling is the impact it has on our emotions. But there’s a downside.

When emotions run high, it’s much harder to make smart choices. Just think about the last time you were really angry. Were you at the top of your game, 100% rational?

Nope, probably not. That’s okay. Me, neither.

Any emotion, from anger to exhilaration, can muddy the waters. When that happens, a lot of people, both men and women, find themselves making poor decisions.

But there’s a way to surf the emotional wave AND make good choices. It’s a simple mind hack that’s been proven to have several positive effects on decision making.[i]

There are a couple of easy ways to do that. You can imagine yourself as a completely different person. For example, instead of an American professional woman, you could imagine that you’re a sheep herder in another part of the world.

Another way is to imagine yourself far off in the future. Like, decades from now.

Either technique will give you some mental breathing room and allow you to see your present life and relationship very differently. As a result, you’ll have a clearer picture of your options.

Below are three times you can use this simple-yet-powerful strategy.

1. At the Beginning of a Relationship

Emotions always play into how you view your relationship. Especially at the beginning.

As you’re getting to know a guy, it’s hard to tell what he’s thinking, what he wants, and how he feels about getting to know you. This is one time when a lot of folks let their emotions slide into the driver’s seat.

Research shows that psychological distance is a good way to reign in strong emotions.[ii]

The goal here isn’t to eliminate emotion, but to make it manageable. Basically, you want enough emotional space to be able to make solid decisions rather than slip into panic mode.

2. When You Need to Make a BIG Decision

Of course, your own emotions aren’t the only thing that can distract you when you have a relationship decision on your hands. Your friends and family will also have ideas of how you should date.

But when you’re making a big decision, like determining the future of a serious relationship, the most important opinion is YOUR OWN. At those times, you need to do what YOU want to do. Not what everyone else thinks you should do.

Psychological distance is a proven way to filter out all those other voices.[iii] It will help you hone in on what you really want, allowing you to be true to yourself.

3. When You Need to Make a Significant Change in Your Relationship

Change doesn’t come easy for most people. And relationship change can be downright stressful.

This is true regardless of how long you’ve been with your guy. Having that very first state-of-the-relationship talk is tough. And it’s just as hard to ask someone you’ve been with for years to adjust a specific behavior.

But psychological distance can make genuinely difficult tasks feel easier.[iv] That’s helpful because the less pressure you feel, in the moment, the better your communication will be.

Think of psychological distance as the swiss army knife of relationship tools. This one technique comes in handy in a lot of different situations.

Romantic relationships are fulfilling. They’re fun, too. But, they can be stressful at times.