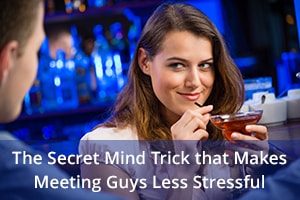 Where do you go to meet guys?

For some, that’s the bar scene. Sure, it’s not ideal, but it is a place full of men. For others, it’s the gym. Or church. Or the grocery store. Or even the office.

Whatever your preferred location, imagine it down to the last detail. What does it smell like? What sounds do you hear? When you find yourself intrigued by a guy, what do you do?

If you’re like most humans, before you even think about saying hi or trying to catch his attention, the very first thing you do is stress out. At least a little.

After all, you’re about to put yourself out there. Maybe he’ll express interest, and maybe he won’t. You’re risking rejection, which is always painful, even if it’s from someone you just met.

Flirting with someone when you have no idea if they’ll flirt back is stressful.

But a recent study done by the University of Kansas suggests there’s a relatively easy way to take stress levels down a few notches. Researchers found an effective technique for making competitive sports less stressful.

“Wait, what?” you say. “James, we’re talking about dating, not football.”

But think about it. Emotionally, sports and dating have a lot in common—especially if you’re trying to spark conversation with a guy in a social setting. There’s competition, risk of failure, and even an audience!

So, how do you lower the stress of flirting?

Researchers saw significant decreases in cortisol (the hormone we produce when we’re stressed out) when athletes engaged in “priming” before they took to the field.

Priming is a simple mental exercise. There are several ways to do it. Here are three suggestions for pulling off your own pre-flirt priming session so you feel more relaxed and do the right things almost automatically.

Athletes have used visualization as a training tool for decades. You just picture yourself doing things perfectly in the mind’s eye. Granted, it sounds a little cheesy. But the truth is, it works. We know because the science backs it up.

But it’s one thing to imagine winning a race. It’s another thing to see yourself successfully flirting. How do you do that?!

You know what confidence looks like. When someone is comfortable, at ease and sure of themselves, they move and talk and interact in a specific way. Think about how you act when you’re doing something you know you’re good at.

Now imagine carrying yourself that way while you’re chatting up a guy. That’s flirting visualization.

Spend just a few minutes focused on that image before you hit the town.

If you flirt, you’re going to get shot down. That’s the simple (but painful) truth. You’re going to meet guys who aren’t into you.

When you do, don’t jump right into another conversation. Instead, take a quick break to assess how you feel. Did that last guy’s lack of interest get to you? That’s okay. Admit that to yourself and practice a little emotional self-regulation.

In other words, talk yourself out of the slump.

Remember the visualization you did before you went out and then, after you feel better, move on.

Go in With Allies

Social environments are tough when you go in alone. So, don’t.

If possible, pair up with a friend you trust. Someone you know won’t compete with you for the same guy’s attention. Someone you’re comfortable enough around to admit it when you’re frustrated. Someone who cares enough about you to remind you that you’re amazing.

That way if you do suffer a setback, you have someone cheering you on. One strong ally can make all the difference in maintaining your confidence when you’re in a mingling environment.

If you’re thinking that’s a lot of strategy for something as simple as flirting, you’re right. It is. But just remember the last time a guy snubbed you and it left you in a funk for the rest of the night.

Would you like to avoid that feeling? These techniques really can make a  big difference.

Every aspect of dating should be fun—especially flirting! If the idea of talking to an attractive guy stresses you out, give these strategies a go.

An extra dose of confidence can open all kinds of doors. A little bit of preparation might just be the key to starting things off on the right with your next romantic connection.