The Secret Counselors Use To Get Guys To Open Up 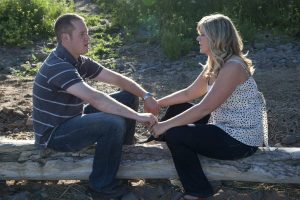 Resolving a point of tension in your relationship feels so good.

It feels like a weight being lifted off your shoulders.

After successfully working through a relationship problem, you feel lighter, happier, and more “together” with your partner than you ever did before. Even if it was just a small issue with your boyfriend.

But it can be endlessly frustrating when your partner shuts you down every time you even try to address an issue that bothers you.

That’s where a third-party can help.

And it doesn’t need to be someone you know. Because they have a tendency to take sides. And even if they don’t, they lack the finesse of a professional counselor.

I know what you’re thinking. “My guy would never make an appointment to see a professional relationship counselor.”

But you only think that because you haven’t seen how quick and easy it is to start text-based relationship counseling. (That’s a link to the online counseling service I recommend, by the way.)

I’ve found that men are much more open minded to the idea of relationship counseling when they can just write back and forth with a licensed counselor instead of making an appointment.

The counselor becomes a mediator of sorts. A trusted third party who has a knack for getting both of you to use more of the emotional intelligence you already have, not only to solve problems, but to enhance the relationship in unexpected ways too.

Are you the only one who purposefully nurtures the relationship?

Do you see its amazing potential and purposely invest in it?

If so, it wouldn’t surprise me. Women tend to be the emotional leaders in relationships.

Well, you’ll spot the occasional man reading a relationship book. But guys often fail to see the relationship as a living thing that needs attention. They’d rather leave all that stuff to their wives and girlfriends.

That’s why it can really pay off to get a licensed relationship counselor working to support your efforts. Even if it’s just for you to have someone to talk to…

A “thinking partner” you can bounce ideas off of as you work on things.

And if you do get him to join the written chat sessions? In that case, a well-trained relationship counselor can take some of the burden off of you, so you stop looking like the bad guy when you ask your man to work on things.

It’s hard to make progress if he gets an attitude every time you try to work on the relationship. A 6-year study of 130 newlyweds found that the strongest predictor of happiness is the husband’s attitude.

That refusal to address conflict or work through disagreements diminishes the potential of a relationship.

You may think you can live with it, but know this. If he won’t listen to you, your relationship has an 81% chance of falling apart.

But maybe you shouldn’t.

Maybe you should let a professional do the balancing of everyone’s needs. That way you can just say what you need and leave it up to the counselor to make sure he hears that request in the right frame of mind.

Speaking of frame of mind, that’s really the secret sauce for relationship counselors. They’re good at framing problems differently. And that’s a skill you can use too.

You see, counselors are masters of framing discussions in the right light. They set the stage before talking about difficult issues. They accomplish that by getting people into the right frame of mind before tackling stressful topics.

We can all learn something from their tactics. So let me share just one of them with you today. It’s a secret for getting guys to open up.

Text-based therapy conversations will vary slightly, but in a brick-and-mortar counseling setting, you’ll never hear a counselor start a conversation like this:

“Jason, why do you always leave it to Janet to initiate communication, planning dates, and everything else?”

Instead, they start by asking for his opinion with a phrase like, “Would you say…?”

For example, “Would you say this relationship with Janet is important to you?”

She’s asking Jason’s opinion. She’s putting him in the driver’s seat where he feels comfortable. No one is accusing him of anything. Once she has him nodding yes, she continues:

“Would you say Janet has seemed upset about something lately?”

She waits for Jason’s affirmative response. Then she says, “Then may I have your permission to interview Janet for the next few minutes so I can gain a better understanding of what’s bothering her?”

After he agrees to this, the counselor asks him not to interrupt even if he sees things differently than the way Janet describes them. She assures him he’ll have his turn next to explain things from his point of view.

Now he listens as Janet opens up. He listens from his own point of view, but he’s also listening to Janet’s words with an awareness of how it sounds to the counselor. Sometimes this alone causes a breakthrough.

But the counselor continues by turning the conversation to Jason. She asks his permission to interview him. And the thing is, he’s just seen how open and authentic Janet was as she responded to the counselor’s empathic questions.

He saw there was no judgment from the counselor toward either of them. She was just extracting information about Janet’s personal experience and her recent perception of events.

So he’s primed to open up in the same way. It was modeled for him.

He’s ready to share his own internal world, conflicts, and confusion about why Janet has been saying certain things or acting in certain ways.

It’s All about Framing

A competent counselor frames the situation as an exploration rather than a witch-hunt. Counselors don’t play the part of a judge, deciding who is to blame.

Instead, they managed to frame the situation as an opportunity. An opportunity for both people to get more of what they want from the relationship.

There are many ways we can use this same concept in our daily lives even when there’s no counselor available to intervene.

In fact, here’s a question you can use as a shortcut to activate this powerful mentality whenever you need to get your man to open up.

Simply ask yourself, “How can I first activate his emotional intelligence?”

Because that’s the secret. It doesn’t matter how you frame the conversation if you can just get that one piece right.

Your job is just to pay attention to the difference.

Think about the types of conversations that naturally activate people’s wisdom. The types of questions that cause a person to slow down and think carefully before rushing to conclusions.

You instinctively know the difference. Here, let me prove it to you. Which of these two conversation starters is going to activate someone’s emotional intelligence?

The first question activates a person’s caution about rushing to a conclusion. Whereas the second question taps into a person’s desire to either fight for, or defend, their position.

In the context of a relationship, just mentioning something you’ve been learning about communication can activate his emotional intelligence.

For example, “I recently read a blog article describing research that showed couples are happiest when they block out time for dates a month ahead of time on their respective calendars. Would you say that’s worth trying?”

Remember the key is to ask yourself the question, “How can I first activate his emotional intelligence?”

Just be open to opportunities to use this idea. Experiment with it in the next few weeks. And if you have a meaningful breakthrough, we’d love to hear about it in the comments section below.

P.S.  In case you’re the kind of person who takes care of everyone else’s needs, rarely ever spending money on yourself, I’ve negotiated a discount exclusively for those of you who follow this link over to the text-based relationship counseling service I mentioned above.

If you could use someone to talk to, remember that’s what professional counselors do best.