Home > Commitment > The Most Important Conversation Technique You’ll Ever Learn

The Most Important Conversation Technique You’ll Ever Learn 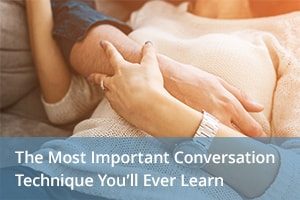 “Why? Why do you have to control everything I do?” David replied. “I have a right to do things without checking in with you first.”

“Then you shouldn’t have gotten into a relationship, Buster, because that’s what people in relationships do. They check in with each other. They communicate.”

“By yelling at each other? Like you do all the time with me?”

“I’m not yelling! This isn’t about me. This is about you. You not caring. You not respecting me.”

David shrugged. “I’d respect you a lot more if you didn’t blow up at me about everything.”

Though you might not guess it from this argument, Brenda and David actually loved each other very much. They were one of my favorite couples to work with. Her high-octane energy perfectly complemented his laid-back coolness. They’d been together for years. But they wanted to sort a few things out before taking the next step… to start a family.

Which is why Brenda came to talk to me.

She knew the way she and David argued wasn’t healthy. She didn’t want them to be the kind of parents who fought in front of their kids.

But she didn’t know what to do. They were stuck in a pattern where nothing she did could get through to David. He just ignored her and did what he wanted anyway.

In fact, just moments before this argument, they’d been snuggling together on the couch, watching television. During an ad break, she’d asked him about his day. He casually mentioned the deposit he made for an expensive mountain bike.

Money is one of the biggest trigger points for couples. And my friends were no exception.

Brenda thought they were on the same page about saving up for a deposit on a house. How could they have a family if they didn’t have a family home? And how would David make a good dad if he continued to be so selfish?

I paused and waited till I had Brenda’s full attention before asking her, “Do you really want this pattern to change?”

I could see the conviction in her eyes. “Then I’m going to teach you a type of dialogue that’s going to change everything.”

Intentional dialogue is a technique that transforms relationships. ANY kind of relationship.

Your relationship with your partner. Your parents. Your children. Your clients.

It drains the conflict from difficult conversations. It stops the vicious cycle of attack and counterattack. And it makes you feel closer and more connected than ever.

Intentional dialogue will give you the kind of relationship you’ve never had before—one in which it’s safe to voice your feelings. Safe to disagree.

How do you do it?

It’s a three-step process that becomes quite natural the more you use it.

(And the more you use it, the more you’ll want to use it—because you’ll see for yourself how good it feels.)

When you look in the mirror, you expect to see an accurate reflection of yourself, not a distortion.

Similarly, when you say something, you expect your partner to hear what you said—not what he thought you probably meant.

Here’s what typically happens. You say one thing; he interprets it in a way you didn’t mean. And vice versa.

That’s why mirroring is important.

It’s the process of repeating back to your partner what you thought he/she said and asking if you got it right.

“So you put a deposit down on the bike because you wanted to make sure you took time to do all those things you love before giving it all up to have kids. Did I understand you correctly?”

Keep asking until you’ve got it right.

You may not agree with your partner, but can you accurately reflect back what you hear him saying about his motivation (without cynicism)? That’s all you have to do here.

“Given what you’ve told me, I can see why you’d feel that you might have to give up mountain biking when we become parents. I can see why you felt the urge to take action while you still have time for those adventures.”

The final step is to empathize. Respond to what he’s feeling from the heart.

“I’m worried about what we’ll have to give up once we have children, too. It’s a scary leap.”

Can you see how the conversation between Brenda and David would have gone quite differently if they’d used intentional dialogue?

It’s HARD to be intentional when you’re mad.

The challenge with intentional dialogue is not the technique itself, but choosing to use it when you’re spoiling for a fight.

But what matters most to you? Winning the fight or keeping the love?

P.S.  You get extra bonus points if you teach your partner this technique and practice it with him before your next heated argument.