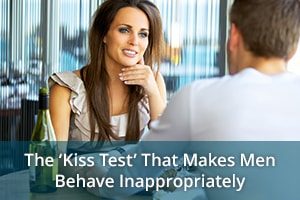 You’re on a date with someone you met through an online dating site.

You picked him carefully, because you have standards. You don’t go out with anyone who doesn’t look nice or doesn’t treat you with respect.

Then he does it.

That thing men do.

That thing that makes you pull back and feel awkward all over again.

And touches your leg.

He’s not trying to grab you. But it kind of feels like it.

He’s pretending he’s just patting you on the thigh to emphasize a point. Like you’d touch someone on the shoulder to get their attention.

But his touch feels awkward, a bit too high on your thigh, almost like he’s trying to feel you up.

Just like that, your trust for him evaporates. It’s three o’clock in the afternoon, for goodness sake! You’re not rubbing up against each other in some bar.

He sees you flinch back. He withdraws his hand quickly. Conversation falters. You shut down.

And just like that, the date is as good as over.

Maybe that’s never happened to you.

These days, many men know to ask permission before they go in for that first hug or kiss. It’s respectful. It gives you the option to say no.

But other men grew up with a different sort of “education.”

One of the most influential (and controversial) seduction teachers for men, David Deangelo, taught a simple “kiss test.”

He recognized that springing a kiss unexpectedly on a woman is a sure-fire way to get a man rejected.

Instead, he taught men to use “simple, innocent” physical contact to test the waters.

Or moving closer to her without actually touching.

If she tenses and pulls back, then she’s not ready for a kiss, Deangelo explained. But if she smiles and relaxes into his touch, then he can assume she’s open to exploring their chemistry.

Most men you meet haven’t studied under Deangelo. But they may have heard some version of the kiss test:

Find some pretext to touch a woman and observe her reaction.

But not all men do this well.

Some men slap you on the shoulder, like they’d slap a male friend.

Other men do it sneakily, so fast you almost don’t realize they’ve touched you.

Still other men invite you for a hug, then embrace you too long or too intimately.

When you assume he’s doing it to cop a feel rather than to test your chemistry, your reaction “tells” him everything he needs to know. You’re not into him.

So how can men and women navigate this mess, without ruining any chance of romance?

I don’t have all the answers. I can’t tell you what is best for you.

But I can give you some suggestions that might help you decide on an effective strategy to break the touch barrier.

When a man feels that all the burden lies on him to make the first move, he can end up acting awkwardly.

Why not relieve him of that burden?

Check in with yourself throughout the date. Do you notice some feelings of good chemistry? Would you like to explore that?

Once you have your answer, adjust how close you’re sitting to him.

Maybe you haven’t relaxed around him yet. Then it might be best to sit across from him with a table between you.

But maybe you are interested. If so, let him know. Move a little closer to him or lean your body towards him. (You can always test the waters by sitting slightly closer to him than would normally make you comfortable. Notice if he scoots back.)

You can also turn the tables and use your own version of the kiss test on him. Tell him his shirt looks soft and ask him if you can touch it. Touch his hand. Bump your shoulder against his.

The arms, hands, and shoulders are the only appropriate locations to touch someone for the first time. The face, thighs, and hair are too intimate.

Honesty is refreshing. It takes courage, but it’s worth it.

Going back to the scenario at the beginning, where he touched your thigh and you jerked back and his face fell, you might do this…

Stop the conversation and say, “Hey, I noticed what happened there. I didn’t mean to communicate that I don’t like you. It’s just that it takes me a little longer to get comfortable being touched.”

Then see if he’ll talk about it with you.

But it can certainly help a man and a woman get off on the right foot.