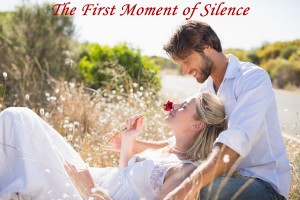 Hey, It’s James. Back with another quick tip for relationship success.

Tell me if you can relate to this situation…

It was unexpected. But, then again, such moments always are.

The conversation reached a natural conclusion. Normally, that would have prompted them to find a new topic, but not this time. Instead, he looked at her and she looked at him.

For a moment, that’s all there was. Just silence, pure and profound. It was powerfully intimate.

The beginning of any relationship is filled with near-constant chatter. We’re so excited to get to know the other person, sometimes we literally talk for hours.

But the first milestone of deep connection isn’t something said. Instead, it’s when you can comfortably sit with someone and say nothing at all.

That kind of silence speaks volumes for connecting deeply with your  man.

To be clear, I’m not talking about a mere lull in the conversation. This isn’t the kind of silence that happens when your mind is wandering, either. These are moments of rare mutual desire to embrace another person through the silence. It’s like saying, “Just your presence is enough for me.”

When you reach the first moment of that kind of silence in a romantic relationship, you know something special is happening. The hard part is not spoiling it.

To make the most of that beautiful moment, I’d like to offer two suggestions.

Here’s the first suggestion for connecting deeply with your man. Don’t talk about it!

Moments of shared silence are power-packed. They’re also a little scary. This is uncharted territory. You’re well beyond social convention. After all, you’re supposed to run from these moments, not embrace them, right?

Even though the vast majority of the time you would actively work to avoid awkward moments of silence, this moment is different. It represents a passage into a secret world where the two of you share an understanding.

If you break that moment by making a comment like, “I guess we ran out of things to talk about!” you are backing away from the bond that was about to be created.

Instead of calling it out, leave the moment as an intimate experience that doesn’t require comment. It is something special you shared that goes beyond words.

And here’s my second suggestion. Don’t turn it into something physical.

It’s common to experience brief moments of silence during physical displays of intimacy. A pause before a kiss, for example. But the first time you connect with your partner without words is different and special. If you rush past it, even to offer a kiss, it loses some of its power. It ends up feeling like a preamble to something else instead of the amazing stand-alone that it should have been.

Not that kisses and words can’t be wonderful, too. They certainly can be. But that first moment of connection through silence is a treasure.

Watch for those moments. The first one is incredible, and they will continue to happen throughout your relationship.

When those moments find you, don’t rush through them. Instead, let them happen. Embrace them fully. And allow them to strengthen the bond between you and your partner.

Till next time!
James Bauer