The Difference between Commitment and Attachment 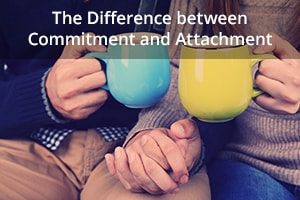 She was going to stick with this relationship no matter what.

She was never going to give up. She wasn’t that sort of person. She despised people who got married then ended up divorcing six months later.

“No one knows how to commit anymore!” she told me. “They give up at the first sign of trouble.”

But I had a feeling something more was going on.

Pushing Belle a bit further, I found out that the man to whom she was so committed wasn’t exactly committed back. He didn’t treat her respectfully. He put himself first. He never talked about their future together.

Was it really commitment Belle was experiencing…

Or something else entirely?

Most of us consider commitment a very good thing. Committed people are the ones you want on your team. It’s no compliment to call someone a “commitment-phobe.”

But what if you’re committed to something that isn’t good for you?

That’s where the difference between commitment and attachment comes in.

Dr. Rachel Naomi Remen explains that distinction like this:

“Attachment is a reflex, an automatic response which often may not reflect our deepest good. Commitment is a conscious choice, to align ourselves with our most genuine values and our sense of purpose.”[1]

So, when you make a commitment, you’re doing it for you. You’re making this choice because it aligns with your values. There’s a feeling of peace about it. You know in your heart it’s the right thing to do, regardless of how things turn out.

If you’re attached, on the other hand, you can’t let go. You hold on tight, because you’re desperate to get what you want. Attachment creates anxiety. It’s as if you’ve created a cage for yourself and walked right in.

It’s very easy to get attached and mistake that feeling for commitment.

That’s what was happening for Belle. She believed she was committed to her relationship, but in fact she was attached to an illusion. She wouldn’t give up until her boyfriend turned into the Prince Charming she knew he could be.

When you’re that attached to something, not even reality can deter you.

No one could tell Belle that the man she was with would never be the husband she dreamed of. The thought of losing this chance at happiness was more important to her than being true to her values.

But Belle’s values mattered. If she searched her heart, she could see that what she was actually committed to was a relationship where both parties treated each other with respect, put each other first, and built a future together.

Could she let go of her attachment and fear of loss if it meant serving that higher commitment?

Here are 3 questions you can use to test whether you’re sticking with your relationship for the right reasons.

Think of everything that annoys you about your guy. Maybe there’s something you don’t like about the way he treats you, his personal grooming habits, or his values.

Are you able to accept that this is the way he is? Can you live with his foibles? Would you be happy with him even if he never changed?

If so, you’re committed.

If not, you may be attached.

Do you feel that you can truly be yourself with him, because he respects what’s important to you? That’s commitment.

When you’re committed, you’re in it because it’s the right thing to do. You do hope for a certain outcome, but you know you can’t control what happens. You’d love to be married someday, but right now you know he’s a good man to be with anyway.

When you’re attached, you stick with it because of the potential pay-off. You’ll do anything if it means he’ll fall even more deeply in love with you. You don’t want to lose this chance.

But relationships aren’t a game that you win or lose. They’re a choice. You choose love, or you choose to leave. Choose consciously, and you’ll succeed every time.