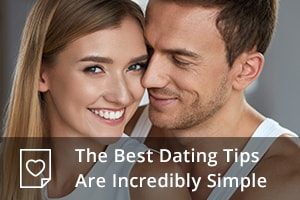 Have you ever fallen for bad dating advice?

There are two pieces of dating advice I come across all the time. You’ve almost certainly heard both of them. You’ve probably even tried to act on them. And the results weren’t what you were looking for.

The very worst dating advice is bad precisely because it seems to make sense. But it doesn’t produce the results you’re looking for.

By way of example, here are two common pieces of dating advice you’re better off avoiding.

What not to do.

How many times have you heard people tell you to just be yourself? It sounds like really good advice, especially if you’re trying to make a heart-to-heart connection.

At its core, the idea of being yourself is solid. But it makes for bad dating advice because you’re most yourself when you’re not even thinking about “being yourself.”

A guy worth pursuing has lots of options when it comes to pairing up with a dating partner. And as a rule of thumb, people follow the path of least resistance.

If a guy is a good match for you, then time together will strengthen the romantic feelings he has for you. If his interest was only based on the excitement of “the chase,” then what’s going to sustain the relationship once you’re a committed couple?

Are you ready to know the three things you should do instead?

Instead of that, do this.

There’s no magic bullet for guaranteed dating success. But there are some solid principles that make it way easier to form a connection. Instead of the bad advice above, try these simple but effective tips.

Simple Tip #1: Focus on getting to know each other.

Have conversations that matter—and that allow both of you to get to know the other person better.

Simple Tip #2: Focus on having fun.

Dating isn’t always easy. Sometimes it doesn’t feel entertaining at all. But when it works, it should be fun.

So find ways to have fun with him. Do things you both like doing, and try not to over analyze where the relationship is at any given point in time. Yes, sometimes a “state of the relationship” talk is needed, but those times are rare. The rest of the time, you should enjoy each other’s company.

Simple Tip #3: Focus on how you feel.

I know it’s a little trite to say “follow your heart.” But I also know that smart, well-adjusted, emotionally mature women usually know deep-down where a relationship is headed.

If there’s a connection with a guy, you’ll feel it. If things are misaligned, you’ll feel that, too. Don’t be afraid to tap into those feelings and follow them.

The worst advice is dangerous because it kind of makes sense. By contrast, the best dating advice is so simple it seems too simple.

Get to know him. Have fun. Stay tuned into how you feel.

Those three things, as simple as they are, really will set you up for the romance you’ve always wanted.