Home > Commitment > The Balance of Power in Your Relationship: Practicing Relationship Yoga 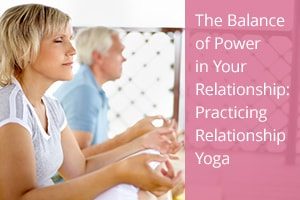 I was visiting with a friend recently. She’s checking out yoga for the first time. I asked her how she likes it, and her feedback was mostly positive.

Except for one area.

“I had no idea I was so bad at balance,” she said. “Seriously, do you know how many times I’ve almost fallen on my butt in front of everyone?!”

It’s true. Balance is one of the hardest things – in yoga and in life. In life, balance allows you to achieve a higher quality of life.

Author and speaker Susan Piver has this to say about balance in yoga. “Is it ever possible to be balanced? I don’t think that it is, because then you’d have to freeze in that position. ‘Got it. Now don’t move.’”[1]

Maybe you can hold a yoga pose for a few deep breaths, but you can’t live your life in that pose. You’ll have to move and walk and do stuff. And as soon as you engage in life, balance is broken.

Literally, every step you take, you’re working to maintain enough balance to avoid “falling on your butt.”

Which makes me think about relationships. Do things ever really level out into a steady rhythm?

One of the most common relationship issues I hear about is the struggle for balance of power. Who calls the shots? Is it even possible to achieve balance?

I think it is . . . if you change your definition of balance.

It’s normal for power to shift back and forth between you and your guy. In that sense, you’ll never have a balanced relationship. At least not for long.

There may be rare moments when you’re both complete equals, but as soon as something happens, one of you takes the lead. That’s healthy.

But things get dicey when one of you ends up with the upper hand all the time.

As neuroscientist Berit Brogaard points out, “the controller will lose respect and admiration for the person who puts up with them, and the follower will build resentment.”[2]

Yeah, that’s not going to create a lot of warm fuzzies. So let’s change our definition of balance.

There’s balance in the moment, and then there’s big picture balance.

The only way achieve balance in the moment is to never move. Never grow. Never allow the relationship to develop.

But big picture balance is different. Because It is possible to establish balance over the long run. That’s where you should focus your attention.

Not on getting your way every time. And not even on making every decision a cooperative effort. Instead, strive for cultivating a cumulative sense of balance.

There are three ingredients for making that happen.

This works well with stuff that’s either really big or really little. For example, things like where the relationship is headed (BIG) . . . or where you’re going to have dinner (tiny detail).

This is not the same as giving him his way. In fact, if he’s a gentleman there’s a good chance he’ll choose what YOU want when you let him have the final say.

Just make sure he knows your trust is a gift. Actually say, “I trust you to take care of that.” That’s a powerful relationship building statement.

There will also be times when you’re the better person to slide into the driver’s seat. When that happens, don’t duke it out for control. Don’t even make it about power.

Instead, tell him you want to know he trusts your judgment, too. If he does, he shouldn’t have any issue letting you take the wheel.

There’s no relationship equivalent for a beautifully balanced yoga pose. Don’t even try to achieve that kind of balance with your guy. It’s not possible.

But you can create big picture balance.

Remember that it’s more about trust than power. Make sure he knows you trust him, and ask him to trust you in return.

That kind of balance is the stuff of truly epic romance.