Only to sit across the table from someone who can’t carry on a conversation.

You’re the one asking the questions. 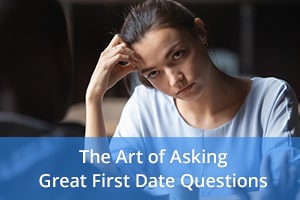 You’re the one filling in the silences.

You’re the one carrying on a monologue in hopes he’ll take a cue.

A bad conversation makes it unlikely you’ll want to see each other again.

What can you do?

He won’t do his part. You tried your best. Better luck next time.

If you saw that guy a few weeks later at a social event, surrounded by friends, you might not even recognize him. He’s laughing, completely relaxed and talking up a storm.

Why was he so stilted with you, when he’s not normally like that?

First dates are awkward situations. Even the most confident among us can clam up. We rack our brains to think of something to say. Our clever jokes sound silly as soon as they leave our mouths.

Luckily, there’s one technique that can cut through that first date awkwardness and create rapport and connection.

Have you ever been on a date with a guy who asked you questions in a way that felt scripted?

It didn’t feel like he even cared about your answer. He was asking for the sake of asking.

The point of a really great question is not to keep the conversation going.

The point of a really great question is to understand someone better.

When you ask a default question—“What do you do? Do you have any siblings? What’s your favorite music?”—you get a default answer. He tells you the same thing he tells everyone else.

That’s why the best questions aren’t scripted. They emerge from the conversation. You notice something, and you want to know more.

The energy behind your question is as important as the question itself.

Why are you asking the question? Is it because you can’t think of anything else to say? Or is it because there’s something interesting there that you want to follow up on?

Otherwise shy people come out of their shell when they realize you’re genuinely interested in understanding something. You’re not just trying to carry on a conversation. You’re curious. You don’t mind waiting while they think about your question.

That’s the recipe for real connection.

How to Formulate Great Questions

But there’s more to questions than that.

Not only does a great question emerge from the conversation and a genuine interest in your date, but it’s also framed in a way that encourages him to open up.

The easiest way to show you how it works is to look at an example.

When your date tells you, “I saw the latest Avengers movie,” what do you say?

The first two responses aren’t questions at all. But they’re the most common way we respond when someone tells us something about themselves.

We give our opinion on what they said, and/or we offer the same information about ourselves.

This kind of dry information exchange can suck the energy out of a date.

The third response, “So you’re into superheroes?” is a step in the right direction, but it could be better.

Questions that can be answered in a few words don’t spark conversation as well as questions that require some thought. An example of an open-ended question is, “What do you think of superheroes?”

You might assume that anyone who watches an Avengers movie must be watching it because they like superheroes, but that’s not always the case. Sometimes, people just want to watch big, action-filled blockbusters. Or maybe they got invited to that particular movie by friends.

Those hidden assumptions can irritate people, because you’re drawing a conclusion about them that may not be true.

Fill-in-the blank questions can help you avoid this mistake. “You went to see the Avengers movie because…?”

The final response, “What do you like about the movies?” is the winner.

It’s an open-ended question that he can take in any direction he wants to. He can talk about why he enjoyed that particular movie or why he likes movies in general.

Asking someone about a positive experience or memory elicits positive feelings. When someone describes something they enjoy, they feel good inside—and they associate those good feelings with you!

Also, focusing on how a person feels about what they just shared, rather than the details of what happened, takes the conversation to a deeper level.

That’s how great first date conversations happen. You ask questions to clarify or learn more about what he said. You frame your questions to be open-ended and free from assumptions. You focus on the meaning of what he shared, rather than the details.

And maybe, just maybe, you’ll both get so wrapped up in the conversation that you won’t want the date to end…

Sparking the beginning of a lifetime of love.