Stop the Pursue-Withdraw Pattern Before It Breaks Your Relationship 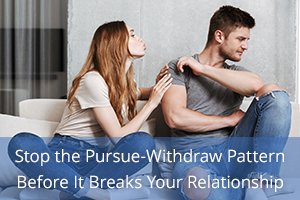 Her relationship felt suffocating, but she didn’t know how to tell her boyfriend that she didn’t want to spend every weekend with him.

She felt she owed it to him to arrange her schedule around him, but she’d begun to resent it.

She’d missed several activities with her girlfriends, because her boyfriend wanted to do something that night. She kept telling herself that it was okay, she loved him, she was part of a couple now, and this is just what couple do.

But the words were building up inside, and she didn’t know how long she could keep them down.

When he argued with his wife, he felt terrible. He’d rather keep his mouth shut and say nothing rather than risk making her mad.

When his wife brought up issues in their marriage, he listened. He knew that listening would make her calm down eventually. But he kept his thoughts to himself. All those unsaid words had begun to put a wall between them.

Both Madison and Jack were stuck in a pursue-withdraw pattern.

It’s one of the most common dynamics in relationships.

You need to be able to spot it, because it not only derails relationships and breaks up marriages. It can sabotage your love life for years to come.

Being with a man like Jack can be tough.

There’s nothing more frustrating than trying to connect with a guy emotionally, only for him to push you away.

So you try even harder. You ask him questions. You create intimate settings where he can let down his guard. But he doesn’t take the bait.

Sometimes you get so frustrated that you provoke a fight. At least, if he gets mad, he might blurt out what’s really in his head.

It feels like he’s deliberately keeping you at a distance so that your relationship never gets any deeper.

Why He Pulls Away

You might believe that a man pulls back because he doesn’t want to be with you.

That’s not necessarily the case!

Men often pull back in order to protect the relationship. It’s about protection, not rejection.

Jack shut down his wife’s attempts at discussion because he felt that saying anything would make things worse. He preferred to keep the peace rather than share an opinion his wife wouldn’t like.

This isn’t something  only men do. Women do it, too.

Madison wasn’t opening up and sharing her truth with her boyfriend, because she didn’t want conflict. She thought she was doing the right thing. She was putting the needs of her relationship above her own.

What Madison and Jack didn’t count on was the way those choices were affecting their emotional connection.

Neither of them felt as close to their partners as they could have. They were pulling back when they should have been leaning in. Their relationships had become stuck.

Maybe you’re not like Madison or Jack. You’re good at leaning in.

You want to talk it out. But your partner won’t.

You’ve been told to stop pushing. He’ll talk to you when he wants to talk to you. Nagging him will only push him away further.

That advice has some flaws. You don’t want to withdraw, too. Leaning in means you’re trying to connect emotionally. That’s a good thing. You just need to tweak how you’re doing it.

A pursuer seeks emotional connection in whatever form possible. She wants to talk it out. If her partner won’t give her positive attention, she’ll settle for the negative attention of a fight.

Pursuers need to learn to stop chasing and start inviting. Create openings for him, but don’t pressure him to walk through those open doors.

A withdrawer seeks emotional safety. Sometimes he feels suffocated by a pursuer’s demands for connection. Other times he feels that emotional connection will sabotage the relationship by bringing up issues that are better left unsaid.

Withdrawers need to take more risks in their relationships. They need to stop running away from conflict and speak their needs clearly. If they need space, they can learn to ask for it.

5 Goals for Your Relationship

Both pursuers and withdrawers can benefit from creating a safe environment to talk about their differences.

Focus on showing each other that:

You can both get what you want: a happy love that’s safe and lasting.