Snag Your Perfect Match Online With This One Easy Trick

You wouldn’t feel sorry for Bella. 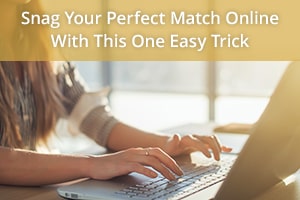 Bella was attractive. The kind of attractive that looks great on camera. She had straight, sleek hair, a small nose, and full lips. She never had any problems buying clothes; everything fit her.

But Bella had her own problems.

She hated online dating. She felt that her looks worked against her. Yes, she got a ton of messages—and she knew she should be grateful—but so many of them were sleazy that she had to steel herself to open her inbox.

The guys she dated didn’t want to get to know her as a person. More often, they boasted about their lifestyle and what they could do for her. It felt like a waste of time. She wished there was some other way to meet men.

Kaitlyn, on the other hand, loved online dating. But you probably wouldn’t have guessed that if you saw her in passing.

Kaitlyn didn’t look like the type of woman who’d do well online. She had short red hair that was clearly a home dye job. She wore flannel shirts and hiking boots. She liked to goof off for the camera. Trying to look sexy just cracked her up.

But Kaitlyn had met a number of great guys online. She had a secret trick she used. She shared it with anyone who asked, even though she knew hardly anyone had the guts to use it. They were too busy trying to look sexy and sound cool.

Kaitlyn’s trick was this:

She loaded up her profile with keywords.

She used OkCupid, because it was free and she liked the quirky vibe. One day, she noticed that OkCupid suggested matches for her based on words she’d included in her profile.

So she filled her profile with all the things she loved: K-pop, anime, Comic Con, Star Wars. She posted a picture of herself with Chewbacca, one from an epic concert, and one from a roller coaster ride where her expression was priceless.

Sure, she didn’t get flooded with messages, but that wasn’t what she wanted. She wanted to hear from guys she could talk to. Guys who loved the same things she loved. Guys with her sense of humor.

Without knowing it, Kaitlyn had hit on a cutting-edge marketing technique.

And it will completely change how you look at online dating.

Everyone knows how online dating has wrecked the dating scene.

Because there are so many choices, people have a shopping mentality when it comes to love. They’re always looking for the best possible option. If they don’t like who they’ve chosen, they just pick someone else.

Given the competition, you might think it’s impossible to succeed in the mass market of dating. You’d be competing with women like Bella, who appear to have it all.

But you’d be missing an incredible opportunity…

One that can get you the perfect match faster and easier than any time in history.

The End of an Era

To understand how it works, you have to know a little bit about the decline of mass marketing and the rise of niche marketing.

Not long ago, the goal of advertising was to reach the masses. Manufacturers created average products for the average person. If you made a generic product that was good enough for most people and bought enough ads, you’d have a hit on your hands.

This philosophy made its way into the dating advice books of the time. If you adjusted your personality and appearance to appeal to the average man—and you made sure you were seen—then you’d nab yourself a husband.

But mass marketing has taken a nosedive in the 20 years. There are too many products. It’s impossible to buy enough ads across all the different media platforms out there to reach everyone.

Creative entrepreneurs hit on a different strategy. Instead of marketing to everyone, they created niche products to appeal to the niche consumer. They didn’t have to compete with bigger companies with more money to spend on ads, because their products didn’t have mass-market appeal.

Today, many believe that niche marketing is the future.

Not just in business, but also in love.

The “Perfect Man” or the Perfect Match?

A lot of dating advice is stuck in the era of mass marketing.

It tells you that men are all the same and they all want the same things. Your job is to appeal to the average guy.

If you compete for a generic guy, you’re playing a game where the stakes are loaded in favor of women like Bella.

Why play that game? Who wants someone generic, anyway?

You want a guy who’s a lot like you. Who shares your tastes, values, and quirks.

But your perfect guy won’t recognize you as a kindred soul unless you dare to be honest about all the ways you’re different.

When it comes to happily ever after, you don’t need every man to want you. You just need the perfect match.