How to Have All the Romance and None of the Regret 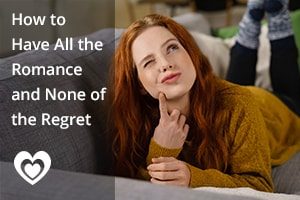 You might think, “Well sure, James. Most of us do.” And you’d be right…as long as you take into account a surprising statistic.

On average, women are roughly two times more likely to have romantic regrets than men.[i] (In contrast, men tend to have more work-related regrets.)

And what’s really fascinating is that the longest lasting, most powerful romantic regrets are not about mistakes. They’re about missed opportunities.

Which means you’re more likely to kick yourself for NOT flirting with the cute guy at Starbucks than for making a fool of yourself if you do.

It’s all about risk. Short-term risks, like embarrassment at a failed flirting attempt, carry more weight in the moment than long-term risks, like regret. Fear of failure can be a powerful motivator.

If so, then you’re ready for a crash course in regret-free romance. Below is a three-step plan to help you carpe that diem.

In other words, is there a real cost or are you just afraid?

“Real cost” means a specific action will probably result in some kind of lasting damage or cost to your sense of well-being.

For example, hooking up with a friend’s boyfriend might sound like fun in the moment, but you’d be risking all kinds of relational fallout. The “real cost” could easily be your friendship and your reputation.

That’s not the same as playing shy around a guy you like. There’s no “real cost” for expressing interest, even if he’s not into you. In that case, the only thing stopping you is fear of rejection.

Of course, not all fear is bad. Fear is the mind’s way of letting you know there’s potential danger ahead.

So here’s the question. Is your fear protecting you, like in the example above, or just getting in the way?

Are you scared to chat up the cute guy at work? Too nervous to let a friend know you’re into him? Afraid of telling your boyfriend you want the relationship to move into more serious territory?

Those fears aren’t protecting you. They’re holding you back.

Once you determine your fear is nothing more than a hurdle to overcome, get on with it. It’s a lot easier when you recall the results of that study I mentioned earlier.

So remind yourself of this: “Odds are I’ll regret holding back more than I’ll regret going for it.”

Have the conversation you’re afraid to have. Let that guy know you dig on him. Don’t fixate on the possibility you’ll be embarrassed. Get out there and take a few calculated risks.

A lot of people stall out at step three. It’s relatively easy to admit the fear of failure is what’s stopping you. But it takes real courage to buck against that fear.

And this is where the information from that study really pays off. If you take some chances, you may or may not have regrets. But if you spend your life playing it safe, always giving in to fear instead of taking action, you’re guaranteed to have regrets.

There are certainly times when the risks aren’t worth the potential rewards. But it’s far more likely that any real romantic regrets you have will result from NOT taking a chance.

When fear holds you back, ask yourself what you’re really afraid of. If there aren’t any “real costs,” then go for it.

Regret-free romance is totally possible. As long as you’re willing to push past the fears that hold you back.