Home > Dating > Revealed: What Manners Can Tell You about A Guy

Revealed: What Manners Can Tell You about A Guy 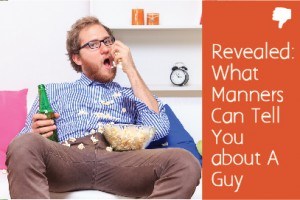 Should you judge a guy by his manners? To help you decide, I’d like you to consider the story of what happened to my friend.

She recently told me about a failed first date. Things started off shaky when he picked her up in a van he clearly used for construction work. She was not one to put too much stock in what a guy drives, that wasn’t a deal-breaker.

However, once on the road he reached behind the seat, retrieved an old t-shirt, and proceeded to blow his nose in it before wadding it up and tossing it over his shoulder into the back.

My friend was understandably grossed out. But more than that, she was offended. Not because she sees herself as Miss Manners, but because he clearly wasn’t invested in impressing her.

So where did this guy blow it, no pun intended? Believe it or not, the issue wasn’t that he did something gross. No, the problem with this guy went deeper. He wasn’t taking my friend’s feelings into account. He wasn’t sensitive to the way his manners might affect her.

To be candid, a lot of guys are rough around the edges. If you’re on a date and he plops his elbows on the table, or chews with his mouth open, or fails to hold the door for you, that doesn’t mean you need to kick him to the curb.

After all, traditionally defined “good manners” change depending on culture, social class, and location. Some women would actually be offended if a guy held the door for them!

Don’t call things off with a guy just because he unknowingly does something that’s in poor taste. Given time, you can find loving ways to smooth out those wrinkles. That’s not really a big deal.

But if he’s oblivious to the effect he has on you, that’s something else.

Emily Post made a career out of teaching etiquette. She wisely observed, “Manners are a sensitive awareness of the feelings of others. If you have that awareness, you have good manners, no matter what fork you use.”

A guy can follow every rule of etiquette and still be rude.

Just one evening with someone like that can feel like a form of torture. And I guarantee that if he doesn’t care about your feelings on the first date, he’s not likely to take your emotions into account when things turn serious.

The essence of good manners is understanding that your actions impact the people around you.

If a guy commits a few social faux pas, that’s not anything to freak out about, so long as he’s making an effort to make you feel comfortable, affirmed and validated. But if the man you’re with lacks any kind of awareness that his actions affect you, it’s probably a good idea to move on.