Home > Commitment > One Response to Survive and Thrive Under Criticism

One Response to Survive and Thrive Under Criticism 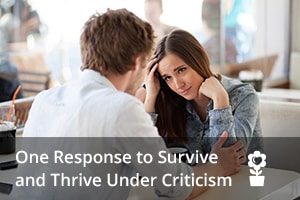 Karen thought it would bond them as a couple. A weekend workshop devoted to developing greater intimacy? Bring it on!

But on the afternoon of the second day, her world turned upside-down.

Her heart was pounding as she told her boyfriend she’d go first. “What I like most about you is that you’re thoughtful, handsome, and loving.” She paused, trying to think of some gentle feedback that wouldn’t hurt his feelings.

“I wish you’d clean up after yourself more. I wish you’d be available more, rather than working so late. I also wish things were more romantic, like they used to be.”

He smiled and nodded warmly. She felt a rush of relief. This wouldn’t be so bad. “Okay, your turn,” she said.

“The three things I like most about you are that you’re beautiful, you’re warm and caring, and you make my life better.”

Karen’s heart soared. She grasped his hand tightly. “Thank you,” she whispered.

“The three things I like least about you,” he continued, “are that you’re always getting after me for things in a way that doesn’t feel respectful. You have really high standards, which are great, but it makes our life stressful in a way it doesn’t have to be. Sometimes I don’t think you really see what you’re doing. You think you’re being positive when you’re actually bringing everyone down.”

How could he say that? After that moment they’d just had?

Even worse, he was smiling, as if what he said had been kind rather than completely devastating.

Karen jerked back her hand. She scooted her chair away from him. Through the white noise ringing in her ears, she could hear him ask, “Honey, are you okay?”

And she wasn’t sure if she’d ever be again.

In all relationships, there are some things better left unsaid.

Like what you really think of his crude best friend, or his parents’ Christmas gifts.

But giving and receiving feedback is essential to healthy relationships.

So I’m going to suggest one simple phrase for responding well.

The problem is, most of us have learned to fear criticism from a very young age. Whether it was a classmate saying, “That shirt looks stupid,” or a teacher writing, “Lazy and unmotivated” on a report card, early experiences taught us that the only good feedback was positive feedback.

In romantic relationships, the stakes are even higher. Negative feedback could mean he’s thinking of leaving you. It doesn’t feel loving.

When you love someone, you’re supposed to see past their faults. You’re certainly not supposed to draw attention to them and make the other person feel bad.

How would you feel about asking your guy about the 3 things he most disliked about you?

How do you think you would react to his answer? Would you rather not know?

Debbie Ford is an author with an interesting perspective.  She says being afraid of feedback hints at deeper fears we need to face.  Such as the fear of not being lovable or not being seen as we want to be seen. She writes:

“Feedback is a useful tool. We never have to believe what others think about us, but if we are afraid to hear what the people closest to us have to say, we should take notice. Most people are afraid they will hear what they fear most.”

That’s what happened to Karen.

In her mind, she was a wonderful partner. Kind, considerate, and happy most of the time. She felt her boyfriend didn’t have any right to complain about her. After all, look at the other women he used to date! Compared to them, she was a saint.

She couldn’t see that his feedback wasn’t intended to make her feel bad. She was a wonderful partner. He wanted to be with her. But he had been invited to share some uncomfortable observations with her, and he did.

How you receive tough feedback has a big impact on whether he feels he can talk to you about difficult stuff. He doesn’t want to make you upset. He’d rather let most things go than make you feel bad. So he ends up holding in a lot of stuff that really does need to be said.

Here’s a simple way to respond to his feedback:

“Okay. What do you think I should do about it?”

Focus on what could change or be done differently, rather than whether he’s right or wrong.

The reward is even deeper intimacy and trust.